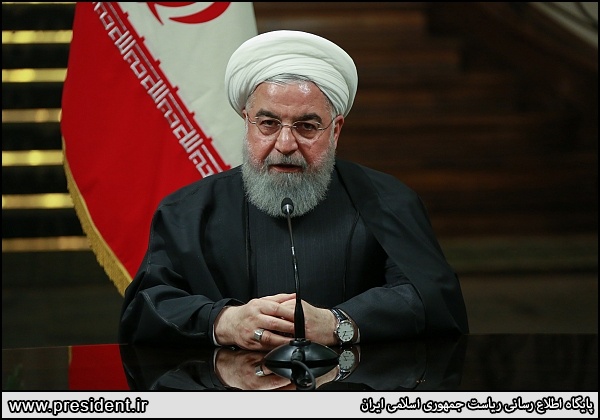 Rouhani: No power above nation, young generation in Iran

President Hassan Rouhani said on Sunday that public participation in elections means existence of national resolve to reconstruct the society, as no power is above the public and young generation.

Iranian President Hassan Rouhani has tasked ministries and organizations with measures for production boom and removal of barriers to investment in the country.

‘Never threaten an Iranian!’ Zarif fires back at Trump

Iranian Foreign Minister Mohammad Javad Zarif has suggested that US President Trump ‘try respect’ when dealing with Iran instead of throwing threats of economic terrorism and genocidal taunts.

President Hassan Rouhani says despite championing dialog, he absolutely rules out the possibility of such engagement with the United States under the current circumstances.

First Vice President Esh’aq Jahangiri said that US President Donald Trump’s threatening tweet indicated that he is totally unfamiliar with the history of Iran.

Spokesman of the Atomic Energy Organization of Iran (AEOI) Behrouz Kamalvandi announced that the country has quadrupled the low level uranium enrichment.

Leader receives Farsi poets for a meeting on Monday

The Leader of the Islamic Revolution Ayatollah Khamenei has held a meeting with a group of Iranian poets.

Zarif warns Trump against danger of warmongering policies of B-Team

The Iranian Foreign Minister Mohammad Javad Zarif has warned Donald Trump against the B-team’s push towards a military confrontation with Iran.

President Donald Trump is a “crazy president” whose threats against Tehran aren’t going to work, a senior Iranian official said Monday, adding that if the President wants to talk, he’ll not only have to show some respect, but come up with a consistent message.

Iranian President Hassan Rouhani called the U.S. administration “novice politicians with naive ideas”, saying President Donald Trump had stepped back from his threats against Tehran after military aides advised him against a war with the Islamic Republic.

Iranian Foreign Minister Mohammad Javad Zarif has warned that the United States is “playing a very, very dangerous game” by beefing up its military presence in the region.

Iran refuses Trump’s offer of talks unless US shows ‘respect’

Iran’s Foreign Minister, Mohammad Javad Zarif, has said his country won’t negotiate with President Donald Trump unless the US shows Tehran “respect” by honoring its commitments under the disputed nuclear deal.

Iran not to give in to pressures; it is stronger than ever

Deputy commander-in-chief of the Islamic Revolution Guards corps (IRGC) General Ali Fadavi has dismissed the foreign pressures as ineffective in comparison with the strong will of the Iranian nation.

Top Military Aide to the Iranian Leader, Major General Yahya Rahim Safavi, said that no power is able to stop great victories of the Islamic Republic of Iran.

Leader: Youth can cause big change in management system

Supreme Leader of the Islamic Revolution Ayatollah Seyyed Ali Khamenei on Wednesday called on the youth to engage the country’s affairs, saying that they can bring about a major evolution in the country’s management system.

A senior Iranian commander has downplayed Washington’s stepped-up belligerent rhetoric against the Islamic Republic, saying US warships deployed to the Persian Gulf get permission for movements there from Iranian forces, who are in full control of the strategic waters.

Iranian President Hassan Rouhani on Wednesday described competition between the state-run and private sectors as totally wrong, saying that the former should not be a rival for the latter.

Chief of General Staff of the Iranian Armed Forces Maj. Gen. Mohammad Hossein Bagheri said that ‘resistance’ is the only way for countering global arrogance.

The spokesman for Iran’s Supreme National Security Council (SNSC) categorically dismissed the notion of talks with the US government unless Washington changes its behavior.

Jens Plotner, the political director of the German Foreign Ministry and the country’s chief negotiator for the Joint Comprehensive Plan of Action (JCPOA), met with Iranian Deputy Foreign Minister Seyyed Abbas Araghchi in Tehran on Thursday.

President Hassan Rouhani says the Islamic Republic will not surrender and stop defending its independence even if it is bombed and its men are killed, wounded, and captured.

Iran says the improper remarks of the US President Donlad Trump just confirms his hostility against the Iranian nation.

Only Donald Trump deserves to be labeled ‘terrorist’: Zarif

The Iranian Foreign Minister Mohammad Javad Zarif has condemned the US President’s move in calling the Iranian people as ‘terrorist nation’, saying only Trump deserves to be called ‘terrorist’.

Foreign Minister of Iran Mohammad Javad Zarif has warned that recent US claims against the Islamic Republic of Iran are extremely dangerous for the world peace.

Iranian Foreign Minister Mohammad Javad Zarif has dismissed any possibility of holding a phone conversation with US Secretary of State Mike Pompeo.

The US policy of maximum pressure against Iran has failed

On May 2, the United States stopped granting waivers for the importation of Iranian oil. The decision was yet another step in the U.S. economic war against Iran. The “maximum pressure” policy is designed to disrupt the Iranian economy and force Iran to enter negotiations on the United States’ terms for a new nuclear deal, substituting for the existing accord that was negotiated with the Obama administration and five world powers in 2015.

Foreign Ministry Spokesman Mousavi said Sat. that the aim of Zarif’s meetings with US Senators is to neutralize the impact of pressure groups such as ‘B-team’ on America’s public opinion and political circles.

The statement comes after US President Donald Trump did not rule out earlier that the Pentagon may send 1,500 more troops to the Middle East, following the deployment of a carrier strike group and a bomber task force to the region. The goal is to contain what Washington describes as an alleged Iranian threat.

Iranian Foreign Minister Mohammad Javad Zarif met with Iraqi Prime Minister Adil Abdul-Mahdi in Baghdad to discuss the situation in the Middle East amid rising tensions between the Teheran and Washington, the Iraqi government said.

Iranian Energy Minister Reza Ardakanian highlighted the Islamic Republic’s infrastructure achievements in dam construction said by the next two years, the capacity of the country’s dams will increase by 2.8 billion cubic meters.

Following the visit of Iranian President Hassan Rouhani to West Azarbaijan Province, 119 gas supply projects worth about $14.8 million were started or inaugurated across the province, Shana reported on Wednesday.

“As of the beginning of the present Iranian year (March 21), about $18.7 billion of foreign exchange revenues earned via non-oil exports have been returned to the country’s economy cycle,” the Governor of the Central Bank of Iran (CBI) Abdolnaser Hemmati announced on Tuesday.

Huge explosion reported near US embassy in Baghdad

An explosion has reportedly taken place near the Green Zone close to the embassy area on Sunday.

At least 12 Saudi-backed mercenaries were killed and injured after Yemeni troops and fighters from Popular Committees targeted their positions in an attack.

Saudi officials are reportedly set to sentence three imprisoned dissident scholars to death and execute them shortly after the holy Muslim fasting month of Ramadan as a brutal crackdown led by Crown Prince Mohammed bin Salman against Muslim preachers and intellectuals widens in the kingdom.

The secretary general of the Lebanese Hezbollah resistance movement says Israeli authorities have described his group as “a strategic threat” to the Tel Aviv regime in an attempt to mobilize support and provoke the international community against it.

The Iranian Majlis on Monday passed a bill to punish perpetrators of acid attacks with death penalty or eye to an eye retaliation.

Three Persian leopards and an Asiatic cheetah have been spotted in Khar Turan National Park of Shahroud, Semnan province, a senior official at the Department of Environment (DOE) said.

Headquarters for Executing the Order of the Imam also known as Setad-e Ejraiy-e Farman-e Hazrat-e Emam has donated some 2,000 packages of home appliances as well as 1,000 livestock to the flood victims in northeastern province of North Khorasan.

The Ministry of Roads and Urban Development will set up a special committee to set rental rates to ensure they won’t exceed consumer inflation, the director of Housing Investment and Economy Department said.