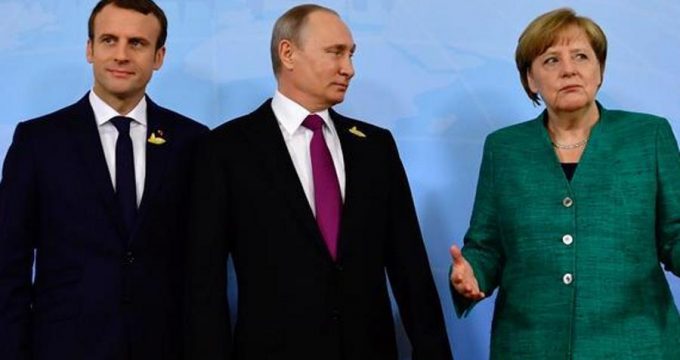 ‘Discussing developments related to the Joint Comprehensive Plan of Action on the Iranian nuclear programme, the leaders noted the importance of preserving this agreement that is a key factor in maintaining international stability and security,’ Kremlin official website reported.

It added: ‘They confirmed the commitment of Russia, France and Germany to continuing mutually beneficial trade and economic cooperation with Iran.’

Meanwhile, they discussed Syrian issues, including the numerous violations of the ceasefire in Idlib by radical armed groups.

Iran’s President Hassan Rouhani said on May 8 that Iran will give a 60-day moratorium to the states parties to Joint Comprehensive Plan of Action (JCPOA) to remedy their breaches and restore Iran’s interests enshrined by the international deal.

Over the past year and after the US illegal withdrawal from Iran nuclear deal and its breach of the UN Security Council Resolution 2231, the Islamic Republic of Iran has shown most of its self-restraint and has given considerable opportunity on requests made by other parties to JCPOA, the statement reads.

May 8 marks the first anniversary of the US unilateral withdrawal from the Iran Deal formally known as the JCPOA endorsed by United Nations Security Council Resolution 2231.
Earlier, EU foreign policy chief Federica Mogherini and foreign ministers of France, Germany and the UK in a joint statement expressed full support for Iran’s nuclear deal.

”We remain fully committed to the preservation and full implementation of the JCPOA, a key achievement of the global nuclear non-proliferation architecture, which is in the security interest of all,” the statement said.