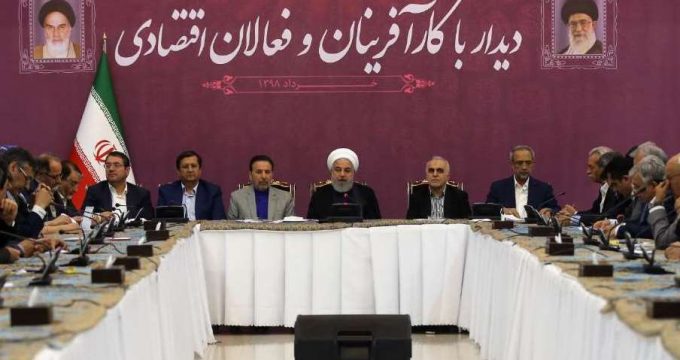 IRNA – Iranian President Hassan Rouhani on Wednesday described competition between the state-run and private sectors as totally wrong, saying that the former should not be a rival for the latter.

Addressing a gathering of job generators and economic activists late on Wednesday, he added that under equal conditions, priority lies with the private sector.

“Today, the enemy has concentrated all the most severe pressures on the economic sector and hopes that it would be able to block economic development on the one hand, and press the strata of society on the other,” he said.

The situation in 2018 was unprecedented in the history of the Islamic Revolution, as the enemy is fully determined to prevent sales of oil and create obstacles in banking relations as the country’s economic lifeline, Rouhani said.

Noting that state-run companies should be ceded, Rouhani said that fortunately, Supreme Leader of the Islamic Revolution Ayatollah Seyyed Ali Khamenei agreed that the military should get out of the economic sector and he also favored merger of the banks and supported it.

Establishing ties with the world is a major work of the government, he said, noting that despite enmities’ plots, the government was successful in the field.

“We have always been keen on peace and security in the region,” he stressed.

Urging the state-run and private sectors to cooperate and consult with each other, he said that all should feel that they shoulder a heavy burden.