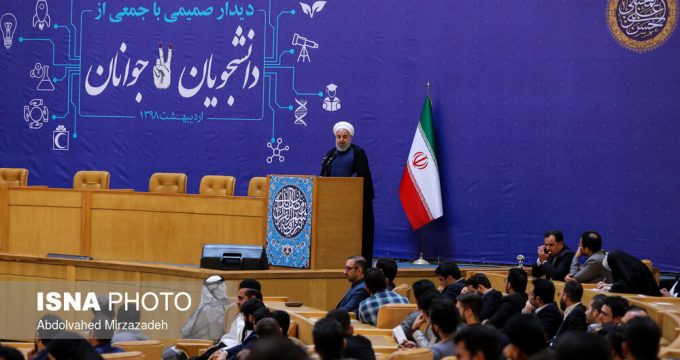 Rouhani: No power above nation, young generation in Iran

IRNA – President Hassan Rouhani said on Sunday that public participation in elections means existence of national resolve to reconstruct the society, as no power is above the public and young generation.

Referring to public turnout in presidential elections on May 19, 2017, he told a gathering of students on Sunday that the people took long steps over the past two years despite obstacles.

Few countries have managed to register two resolutions in its favor, one of them is resolution of dialogue among civilizations floated by former president Seyyed Mohammad Khatami and the other is world free of violence and extremism in the tenure of Government of Prudence and Hope, he said.

Creativity ranking of the Iranian youth has advanced from 120 to 65, top executive said, noting that this indicates the younger generation’s big scientific move.

Active presence of the young generation and using the Constitution’s capacities are the solutions to the country’s problems, Rouhani reiterated.

Hassan Rouhani, Iran elections, young iranian May 20, 2019
Old grudges, new weapons… is the US on the brink of war with Iran?
Iranian lawmakers seek to impeach oil minister Zanganeh over mismanagement