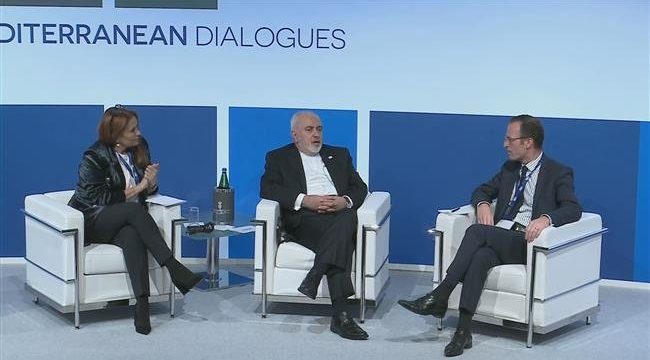 President arrived in Khoy county minutes ago to begin the provincial tour of the Government of Prudence and Hope to West Azerbaijan province.

Rouhani: Iran nation to give crushing response to US on Islamic Revolution anniv.

Iranian President Hassan Rouhani said that the Iranian nation will give a response to the United States’ hostile acts on February 11, the 40th anniversary of the Islamic Revolution.

The Iranian foreign minister has tweeted that in the meeting with UK chief diplomat they had discussed issues of mutual interest, especially maintaining the JCPOA and Europe’s commitment to normalize economic relations with Iran.

Foreign Minister Mohammad Javad Zarif said on Monday that the Islamic Republic of Iran is ready to cooperate with the UN in all fields in Afghanistan and is to back peace initiatives in the country.

Collaborators with Trump, accomplices in US crimes: Iran’s Shamkhani

Secretary of Iran’s Supreme National Security Council (SNSC) Ali Shamkhani says European countries collaborating with the United States’ policies are accomplices in crimes committed by the US, the Israeli regime and reactionary states in the region.

US sanctions Iran for alleged oil shipping to Syria

The US Department of Treasury’s Office of Foreign Assets Control (OFAC) has sanctioned 9 individuals and entities for the so-called shipping Iran oil to Syria and in return financing Hezbollah and Hamas.

Five of the 14 Iranian border guards who had been abducted by terrorists at a military post on the common border with Pakistan back in October returned home following consultations with Pakistani diplomatic and military officials.

Iran is implementing its side of its nuclear deal with major powers, the U.N. atomic watchdog policing the pact reaffirmed on Thursday, two weeks after the latest wave of reimposed U.S. sanctions against Tehran took effect.

Foreign Minister Mohammad-Javad Zarif says the JCPOA safeguarding had been the pivot of talks with his Italian counterpart Enzo Moavero Milanesi on Thursday.

Iran sees no point in fresh nuclear talks with the US without guarantees it will not renege on any deal made, Foreign Minister Mohammad Javad Zarif said on Thursday.

The 32nd International Islamic Unity Conference opened in Tehran on Saturday and will continue through Monday (Nov. 26).

Iran’s President Hassan Rouhani on Saturday called Israel a “cancerous tumor” established by Western countries to advance their interests in the Middle East.

Iranian Foreign Minister Mohammad Javad Zarif underlined that any plan to establish peace in Afghanistan should be implemented in the presence and partnership of the Afghan government.

Supreme Leader of the Islamic Revolution Ayatollah Seyyed Ali Khamenei has received guests to the 32nd International Islamic Unity Conference that opened in Tehran on Saturday.

Leader of the Islamic Revolution Ayatollah Seyyed Ali Khamenei says a “resistance movement” based on Islam is building up across the world, which is unsettling world powers, especially the US.

The ninth edition of Iran Air Show kicked off this morning (Sunday) on Kish Island in the Persian Gulf, and will continue through Nov. 29.

80 percent of Iraqi kids have experienced violence at home or in school: UNICEF report

The United Nations International Children’s Emergency Fund (UNICEF) says 80 percent of children in Iraq are subjected to violence either at home or in school, stating that the majority of the minors are not receiving any assistance from the Baghdad government.

The United Nations said on Friday it was ready to help supervise Yemen’s vital Hudaydah port to protect it from “potential destruction”, as its envoy met Houthi Ansarullah movement leaders.

Earlier, the US State Department Special Envoy for Syria stated that the US presence in Syria is aimed at defeating the Islamic State and forcing the departure of Iranian forces from the country.

A senior official of Lebanon’s resistance movement Hezbollah says Jerusalem al-Quds will always remain an integral part of Palestine despite US and Israeli attempts to distort this reality.

It is not easy for US President Donald Trump to simply turn a blind eye to probable implication of Saudi Crown Prince Mohammed bin Salman in the murder of dissident journalist Jamal Khashoggi, says a US senator.

IMO urges US, member states not to endanger maritime security

Iranian Ambassador to London Hamid Baedinejad said Thu. that the International Maritime Organization (IMO) responded to Iran’s demand and called on the United States and other member states to refrain from taking any action which puts international maritime security at risk.

At MED conf. in Rome; Zarif calls on EU to resist US pressures

Iranian Foreign Minister Mohammad Javad Zarif on Thursday delivered a speech at the Mediterranean Dialogues Conference (MED) in the Italian capital of Rome, during which he defended Iran’s foreign policy and called on Europe to take practical steps to keep trade relations with Iran.

Iran stresses need for setting up banking channel with EU

Noah’s Ark has been discovered on top of a mountain in Iran after petrified wooden beams were found on the summit, according to the latest conspiracy theories.

Iranian media is reporting that the country has implemented a measure allowing officials to waive rules relating to stamping visas in foreigners’ passports.

Over 550 people have been injured in a strong 6.3-magnitude earthquake in western Iran, also felt in the Iraqi capital, Baghdad.