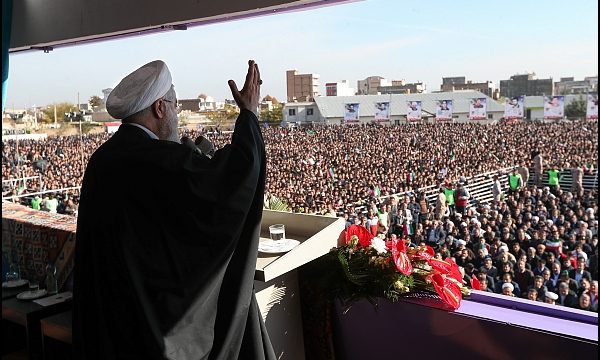 Rouhani: Iran nation to give crushing response to US on Islamic Revolution anniv.

MNA – Iranian President Hassan Rouhani said that the Iranian nation will give a response to the United States’ hostile acts on February 11, the 40th anniversary of the Islamic Revolution.

“I appreciate the noble, brave people of Iran for standing firmly against pressures in recent months when the enemies wanted to make us regret our independence, freedom, Islam and democracy,” he continued.

He added, “the enemies of the Iranian nation wanted to see Iran in turbulence on Aban 13 [November 5], and watch Iranian people’s sadness, but the people demonstrated their resistance and steadfastness against the enemies on that day.”

“We will make all our enemies understand that they will not be able to deviate us from the path of our lofty goals by putting the people under pressure and create economic issues for the people,” Rouhani continued.

We will remain independent and free and will not yield to US pressures, said Rouhani, adding, “those ruling the White House must know that the people of Iran are brave and great and we will not surrender to any power, but only to the Almighty.”

“The enemies are trying to put economic pressure and wage psychological war against the people of Iran. They think that the people will surrender to their bullying under these pressures,” he added.

The President of the Islamic Republic of Iran also said, “the people of Iran must know well that we have been loyal to our commitment. We have never started a dispute or economic war against anybody, but our enemies are trying to avenge the people of Iran due to their consecutive failure in the region.”

“Alongside the people of Iran, all people from Iraq, Syria, Lebanon, Yemen, Afghanistan, Pakistan and the entire World of Islam are in favor of resistance, faith, Islam and their independence. Of course, whenever our Muslim brothers ask for our help, we will carry out our duty and help them.”

“Of course, we worked hard to not let enemies dominate ISIL in this region. We know that they are angry and upset,” he added.

“We will establish better, closer relations with our neighbors. We will strengthen our relations with the Azerbaijan Republic, Turkey, Iraq and other countries day by day,” continued the President.