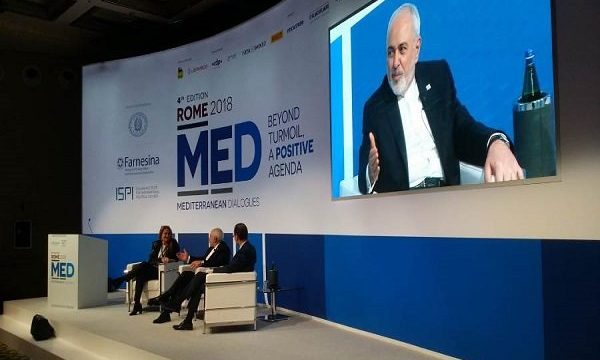 At MED conf. in Rome; Zarif calls on EU to resist US pressures

MNA – Iranian Foreign Minister Mohammad Javad Zarif on Thursday delivered a speech at the Mediterranean Dialogues Conference (MED) in the Italian capital of Rome, during which he defended Iran’s foreign policy and called on Europe to take practical steps to keep trade relations with Iran.

“We negotiated with the US along with other countries, and reached a good conclusion. Now Europe and others should make investments and pay costs for their efforts and global security. You can’t swim without getting wet,” the Iranian Foreign Minister Mohammad Javad Zarif said during his speech at the 4th edition of Mediterranean Dialogues (Rome MED 2018) on Friday.

Zarif also said “Iran has survived for 7,000 years, not just 40 years, and will do so in the future. The history of Iranian and Italian empires is longer than the lifespan of certain countries, and that’s why we don’t give in to coercion, because we know no power is eternal.”

“Everyone knows me as a man of interaction and dialogue; but when it comes to choosing between Iran’s independence and interaction with the world, I’d definitely choose my country’s independence,” Zarif added.

Zarif undelined that “diplomacy is not a game, and we’re always ready for serious action.” 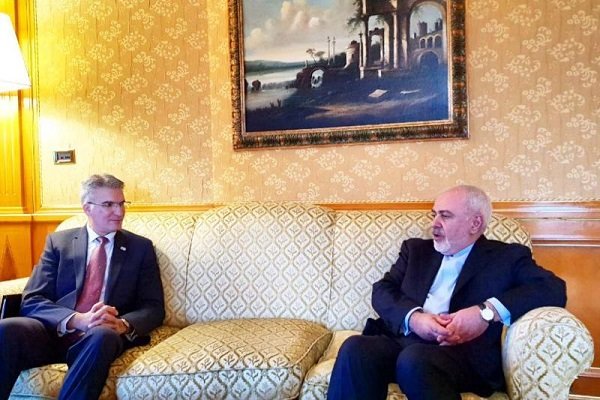 Also on the sidlines of the confrence in Rome, Zarif on Friday held talks with his Maltese counterpart Carmelo Abela in the Italian capital Rome.

According to official website of Foreign Ministry, during the talks, the two sides conferred on the Iran nuclear deal, bilateral relations between Iran and Malta, regional issues including the developments in Syria and Yemen, and other issues of mutual interest.

Earlier in the day, Oman”s deputy foreign minister came toZarif”s residence and held talks with him on the latest developments in bilateral ties and regional issues.