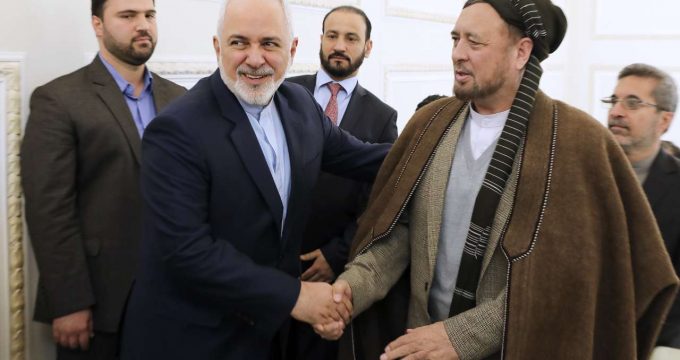 FNA – Iranian Foreign Minister Mohammad Javad Zarif underlined that any plan to establish peace in Afghanistan should be implemented in the presence and partnership of the Afghan government.

Zarif made the remarks in a meeting with Deputy Afghan Chief Executive Mohammad Mohaqiq in Tehran on Saturday.

He also underscored the need for the further broadening of bilateral ties between Tehran and Kabul in different arenas.

During the meeting, progress in the activities of the five committees set up to develop relations between the two countries was also studied.

Earlier this month, Iran had also renewed Tehran’s backing for peaceful settlement of problems of Afghanistan, expressing the hope that the Afghanistan Peace Conference would achieve the intended outcomes.

“We and other countries are trying to help Afghanistan and I hope the conference would achieve its objectives, given the viewpoints presenting in it,” said Director General of the Iranian Foreign Ministry for West Asian Affairs Rasoul Eslami, representing Iran in Afghanistan Peace Conference in Moscow.

Second International Afghanistan Peace Conference attended by regional and global players as well as friendly countries of Kabul was held in Moscow on November 9.

Meeting of the “Moscow Format” on Afghanistan took place on November 9 in a closed format in Moscow in President Hotel. For the first time in an international meeting of this level was attended by the delegation of the political office of the Taliban in Doha.

Iran, Russia, Afghanistan, China, Pakistan, India, Kazakhstan, Tajikistan, Kyrgyzstan, Uzbekistan and Turkmenistan attended the event. The US was also represented by an expert from its embassy in Moscow.