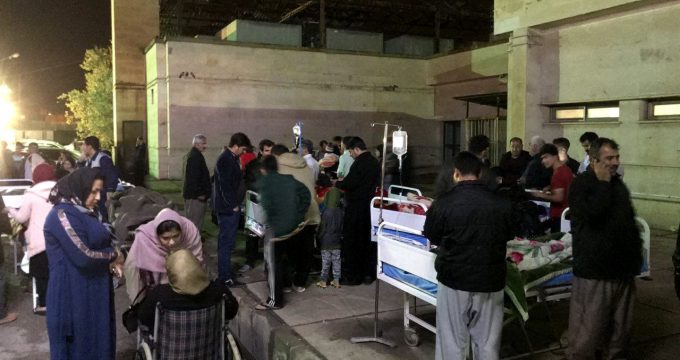 Press TV – Over 550 people have been injured in a strong 6.3-magnitude earthquake in western Iran, also felt in the Iraqi capital, Baghdad.

According to the US Geological Survey, (USGS), the quake occurred at a depth of 10 kilometers on Sunday.

The official IRNA news agency quoted University of Tehran’s Institute of Geophysics as saying that the quake struck 17 km west of the Iranian city of Sarpol-e-Zahab in Kermanshah Province, 18 km from Qasr-e Shirin and 33 km from the city of Gilan-e-Gharb.

The institute also put the magnitude of the quake at 6.4 followed by a number of aftershocks ranging from 5.2-3 degrees on the Richter scale.

The quake was also felt in most cities in Iran’s Kermanshah and Ilam provinces as well as in Tabriz and Urmia, the capital cities of East and West Azarbaijan provinces, respectively.

Iran’s Red Crescent Society has dispatched relief and rescue teams to the affected areas where local officials have reported cases of injuries among people.

Fears of aftershocks have sent people in the province out onto the streets and parks in cold weather.

Kermanshah province’s deputy governor general was quoted by Fars news agency as saying that scores of people have been treated for injuries, mostly in the two cities of Sarpol-e-Zahab and Gilan-e-Gharb.

The official added that power supply has been cut in some affected areas in Kermanshah Province with technical teams doing their best to restore electricity.

Meanwhile, the Iraqi Geological Survey said the quake was felt in the capital Baghdad and in Erbil in the Iraqi Kurdistan Region with the country’s Interior Ministry saying that no damage or casualties had been reported so far.

Last November, Kermanshah Province was hit by a powerful 7.3-magnitude earthquake, which killed hundreds of people.

The epicenter of 2017 quake was 32 kilometers south of the Iraqi city of Halabja, in Iraqi Kurdistan, and just across the border from Iran, but the highest casualties occurred in the city of Sarpol-e Zahab, in Iran’s Kermanshah Province.