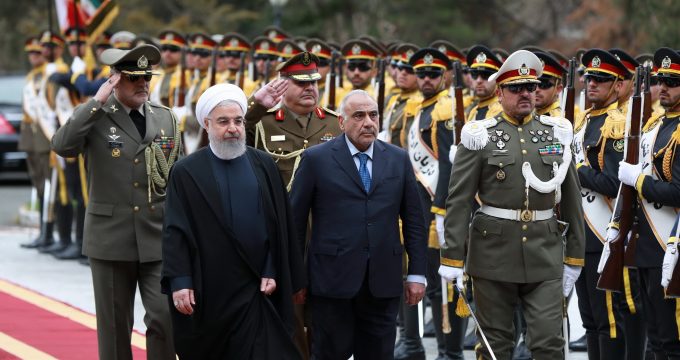 Weekly report: Iraqi PM in Iran to cement ties in blow to US sanctions

Iran’s President Rouhani called on Interior Minister and governors of the western and southern provinces to use all equipments and facilities for saving the lives of people who are facing floods.

Iran has marked the 40th anniversary of the historic referendum in which Iranians overwhelmingly voted for the establishment of an Islamic Republic following the overthrow of the monarchy of the US-backed Pahlavi regime.

Iran has brotherly and close relations with many Arab states on a number of Muslim world issues and shares concerns and interests with them, and thus, is following all issues and developments of the Arab countries, Iran Foreign Ministry spokesman said.

Iran’s foreign minister says the US is waging “economic terrorism” against the Islamic Republic by employing restrictive measures that are troubling the relief efforts targeting flood-stricken people across the country.

Tehran says the United States has frozen the accounts of the Iranian Red Crescent Society as part of its cruel sanctions against the Iranian people, thus preventing other countries from sending humanitarian aid to people in Iran’s flood-stricken areas.

In a special urgent meeting with responsible officials on Tuesday evening, Leader of Islamic Revolution Ayatollah Seyed Ali Khamenei asked officials to continue all necessary taken measures seriously until all problems of the people in the flood-hit areas of the country are tackled.

President Hassan Rouhani has strongly rebuked the US for blocking international financial channels that are trying to provide relief to flood-stricken people across the country, calling it an ‘unprecedented crime’.

Zarif slams Europe for not resisting US economic terrorism

Iranian Foreign Minister in a message criticized Europe for failing to confront US economic terrorism.

MNA – Commander of the Islamic Revolutionary Guard Corps (IRGC) Major General Mohammad Ali Jafari said the force is taking every necessary measure to prevent the possible damages of the upcoming wave of rains in the flood-hit areas.

Leader of the Islamic Revolution Ayatollah Seyed Ali Khamenei on Thursday appointed Hojatoleslam Ahmad Marvi as the new chief custodian and trustee of the Astan Quds Razavi, a charitable organization holding trusteeship of the eighth Shiite Imam’s shrine in holy city of Mashhad.

Iranian Foreign Minister Mohammad Javad Zarif says Tehran will keep pressurizing Europe to comply with their commitments to the landmark nuclear deal (JCPOA) which Iran signed with world powers in 2015.

US and its propaganda war to complete economic terrorism

American officials are struggling to increase the severity of their propaganda war against Tehran in the face of accusations of economic terrorism and the relief from the overwhelming pressure in the relief efforts for flood-hit Iranian.

The UN nuclear agency says it has inspected a site in Tehran which Israeli PM Benjamin Netanyahu last year described as a “secret atomic warehouse” but it turned out to be a carpet cleaning facility.

Iranian Foreign Minister Mohammad Javad Zarif said US President Donald Trump and Secretary of State Mike Pompeo would make any “contradictory” claims against Iran as the occasion may demand to either demonize the Islamic Republic or push for “regime change” in the country.

US to designate elite Iranian force as terrorist organization

Iran to designate US forces as terrorists if Washington blacklists IRGC: senior MP

Chairman of National Security and Foreign Policy Commission of Iranian Parliament Heshmatollah Falahatpisheh said that Iran will strike back at any move for blacklisting Islamic Revolutionary Guards Corps.

Iranian President Hassan Rouhani called on Saturday for Iran and neighbouring Iraq to expand their gas and electricity trade and work towards fulfilling a plan to connect their railroads.

Despite its made announcement, the US has blocked the Red Cross humanitarian aid from reaching Iran’s Red Crescent Society, Iranian Parliament Speaker Ali Larijani lamented on Saturday.

President.ir – The President of the Islamic Republic of Iran and the Prime Minister of Iraq stressed that both governments are serious about further development of relations between the two countries.

Leader of the Islamic Revolution Ayatollah Khamenei pardoned or commuted the sentences of 1,117 of Iranian convicts on the occasion of Eid al-Mab’ath, and the Islamic Republic Day.

Iraqi govt. should take actions to force US troops out of Iraq: Ayatollah Khamenei

Leader of the Islamic Revolution Ayatollah Khamenei has urged the Iraqi government to take actions to make the American troops leave Iraq.

The balance between supply and demand in the oil market is fragile, Iranian Oil Minister Bijan Namdar Zanganeh said on Monday.

Despite recent flood and river outburst in Khuzestan, all pipelines and oil installations of the National Iranian South Oil Company are in full protection and security, NISOC chief said.

US sanctions ineffective to reduce foreign tourists to Iran

India says in talks with US on import of Iranian oil

India said on Thursday it was engaged in talks with the US over extending a waiver beyond May 4 for the import of Iranian crude, according to local news outlets.

A member of the Expediency Council, Gholamreza Mesbahi Moghadam, said Sat. the date for holding a session on reviewing Iran’s accession to the two FATF-related bills is still uncertain.

Israeli forces have attacked Palestinians taking part in an anti-occupation protest along the edge of the besieged Gaza Strip, leaving more than 80 people injured.

Iraq closes border crossing with Iran due to floods: sources

Iraq on Saturday closed its Sheeb border crossing with Iran to travelers and trade until further notice, Iraqi security sources said, as flooding continues to submerge villages in the south of Iran.

Saudi Arabia has reopened its consulate in Iraq as Riyadh seeks closer ties with Baghdad amid Iran’s growing relations with his neighboring Arab country following the defeat of Daesh.

While several cities and villages in western Iran are grappling with serious flooding, an earthquake measuring 5.2 on the Richter scale struck an area on the border of provinces of Ilam and Kermanshah on Monday.

Iranians marked the end of their two-week Nowruz holiday by spending a quality time with their families in the nature.

Iranian prominent actor Jamshid Mashayekhi passed away at 85 due to old age and illness on Tuesday night.

Iran-Turkmenistan first joint Nowruz rituals was held with the attendance of Iranian and Turkmen vice presidents in Bajgiran border crossing.

Iran’s Energy Minister Reza Ardakanian has announced that the country’s wetlands have been revived after the recent rainfalls, while the water level in Lake Urmia, northwest of Iran, has increased by 32 centimeters.