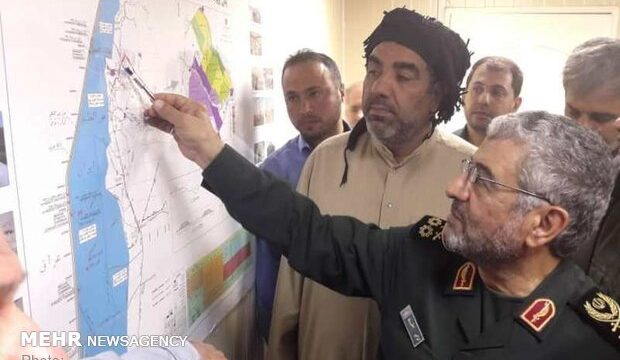 MNA – Commander of the Islamic Revolutionary Guard Corps (IRGC) Major General Mohammad Ali Jafari said the force is taking every necessary measure to prevent the possible damages of the upcoming wave of rains in the flood-hit areas.

During a visit to the flood-hit regions in southern Khuzestan province on Thursday, Major General Jafari said the armed forces are putting all-out efforts to reduce the damages inflicted by the flash floods across the country.

“IRGC is taking the necessary measures to prevent any further damage in Khuzestan by the next wave of heavy raining in the coming days,” he added.

To do so, he said, the teams are dredging the major rivers including Karkheh and Nisan.

Jafari noted that “in the recent floods, the Basij and other revolutionary institutions consider serving the people in the affected areas as their primary duty.”

Meanwhile, he stressed that all armed forces including the IRGC, Army, and Basij will continue to stand alongside the people and provide relief.  He also expressed the readiness of the forces under his command to rebuild villages and people’s houses in damaged areas.

Heavy rains in the past two weeks have caused devastating floods in various parts of Iran, leading to the death of over 70 people and injuring and displacing many others.

The water torrents have hit 400 villages and cities in 15 provinces across Iran.

Some 78 roads linking cities and 2,199 roads connecting villages were blocked by the floods and some 84 bridges are destructed in the flood-stricken areas.