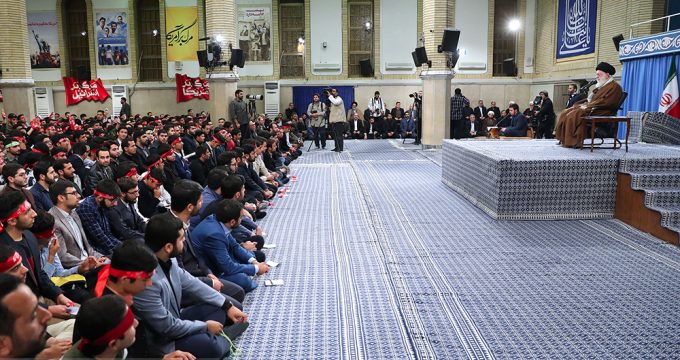 Iran negated US fratricidal plots in ME: IRGC

The presence of Iran’s military advisors neutralized the US plots in the region to ignite religious, sectarian and fratricidal wars, said the spokesman of the Islamic Revolution Guard Corps (IRGC) on Monday.

Zarif says no tyrant will end struggle for justice

The Iranian foreign minister referring to Arbaeen rituals, said no tyrant will be able to end the struggle for justice.

Foreign ministers of Iran, Turkey and the Republic of Azerbaijan held a trilateral meeting in the Turkish city of Istanbul on Tuesday morning.

Sixth trilateral meeting of ministers of Foreign Affairs of Iran, Azerbaijan, and Turkey was held in Istanbul today.

Iranian Foreign Minister said on Wednesday that Pakistani officials have promised to make every effort and adopt necessary measures to free Iranian border guards who were abducted by terrorists and taken to Pakistan territory.

Prime Minister Benjamin Netanyahu has admitted that Israel is behind what Iran calls “false flags” in Europe where Tehran has been accused of assassination plans.

Nationwide rallies due in Iran on anniversary of US embassy takeover

The Iranian people from all walks of life are slated to participate in rallies across the country to mark the anniversary of US Tehran embassy takeover and express their opposition to the arrogant policies and attitudes of the enemies, particularly the US.

Trump set to reimpose all nuclear sanctions on Iran

Foreign and finance ministers from the European Union, United Kingdom, France and Germany on Friday condemned the Trump administration’s plans to reimpose the last set of sanctions lifted under the Iran nuclear deal early next week.

Leader receives students ahead of Day of Fight against Global Arrogance

A number of university and high school students met with Leader of Islamic Revolution Ayatollah Khamenei on Sat., ahead of the National Day of Fight against Global Arrogance.

D8 Council of Foreign Ministers kicks off in Turkey

Ayatollah Khamenei: US always defeated in face-off with Iran

Leader of the Islamic Revolution Ayatollah Seyyed Ali Khamenei says a face-off has been going on between the US and Iran for the past 40 years, in which the United States has always been defeated.

Iran’s General Soleimani to Trump: ‘I Will Stand against You’

Commander of the Islamic Revolution Guards Corps (IRGC) Quds Force Major General Qassem Soleimani responded to US President Donald Trump’s announcement that ‘sanctions are coming’ with a Game of Thrones-inspired meme of his own.

General Staff of Iranian Armed Forces dismisses talks with US

General Staff of the Iranian Armed Forces in a statement on Saturday blasted the US administration for its insulting approach towards the country, rejecting any possibility for talks with Washington.

UN identifies five countries as victims of terrorism in 2017

Head of the UN Information Center in Tehran Maria Dotsenko said on Sunday that in the year 2017 about 3/4th of the victims of terrorists were in Afghanistan, Iraq, Nigeria, Somalia and Syria.

According to media reports, the Nigerian Army has martyred 10 members of the Shia protesters during Arbaeen procession at Zuba in central Nigeria Sat.

Turkish President Recep Tayyip Erdogan says the assassination of Saudi dissident journalist Jamal Khashoggi in Istanbul had been ordered at the “highest levels” of the Saudi government, but he does “not believe for a second” that King Salman issued the order.

The U.S. has agreed to let eight countries — including Japan, India and South Korea — keep buying Iranian oil after it reimposes sanctions on the OPEC producer on Nov. 5, a senior administration official said.

Governor of Central Bank of Iran (CBI) Abdolnaser Hemmati says the US has failed in its efforts to impose sweeping sanctions on the Islamic Republic of Iran’s oil exports.

Russia’s oil producer Zarubezhneft that had entered into contracts on developing two fields in Iran in March 2018, quit those projects prior to the US sanctions kicking in by selling them to the Russian federal state unitary enterprise, Promsyryeimport, a source close to the transaction told TASS.

The Civil Aviation Organization of the Islamic Republic of Iran (CAO.IRI) has dismissed some media reports that some Iranian airliners were refused fuel in Turkey’s Istanbul airports, saying there is no suspension in flights between the two countries.

Iran’s national wushu team has been crowned world’s champions for the first time in the 9th Sanda World Cup.

Millions converge on Iraq’s Karaba on eve of Arba’een

Pilgrims from around the world continue to converge on the holy Iraqi city of Karbala on the eve of Arba’een, which marks 40 days since the martyrdom anniversary of Imam Hussein (PBUH), the third Shia Imam.

Millions converge on Iraq’s Karaba on eve of Arba’een

Pilgrims from around the world continue to converge on the holy Iraqi city of Karbala on the eve of Arba’een, which marks 40 days since the martyrdom anniversary of Imam Hussein (PBUH), the third Shia Imam.

Some 46 Iranian pilgrims died during the Arbaeen mourning ceremony in Iraq, an Iranian Insurance official announced in this central Iraqi city of Karbala on Wednesday.