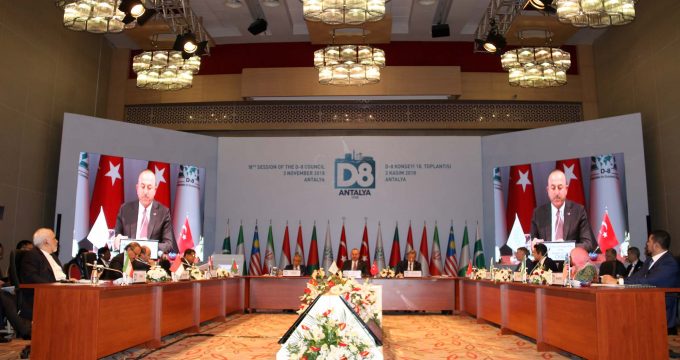 D8 Council of Foreign Ministers kicks off in Turkey

IRNA – The 18th session of the D8 Council of Foreign Ministers opened with the attendance of Iranian Foreign Minister Mohammad Javad Zarif in Antalya, Turkey, on Saturday.

The D-8 Organization for Economic Cooperation, also known as Developing-8, is an organization for development of co-operation among the following countries: Bangladesh, Egypt, Nigeria, Indonesia, Iran, Malaysia, Pakistan, and Turkey.

Addressing the opening ceremony of the event, Turkish Foreign Minister Mevlüt Çavuşoğlu referred to establishing set-off chamber in Friday meeting based on which a mechanism free of dollar and euro was underlined by member states.

Çavuşoğlu urged D-8 member states to pay attention to trade based on national currencies to be able to stand against economic threats.

Zarif is also supposed to deliver a speech in the meeting and a statement will be released after the session.

Thanks to the mechanism to use non-dollar and non-euro currencies by D-8 member states, taking advantage of national currencies is a priority, Abolghasem Tahmasebi, Head of Iran expert group in D-8 Commission earlier said.

Speaking to the Islamic Republic News Agency (IRNA) on Friday, Tahmasebi said during the meeting issues related to D-8 annual plans and also the budget were discussed.

The annual budget and also establishing D-8 University were also ratified in the meeting, he said.

He also referred to launching D-8 credit card by Malaysian delegation which is the same as master card, saying the issue will be reviewed by the member states.

The previous 17th session of the D8 Council was held in Istanbul in October 2017.

The 41st session of the D8 Commission was held in Istanbul from November 1 to 2 under the chairmanship of the Republic of Turkey. The commissioners and heads of delegations from all the D8 Member States took part in the two-day event.