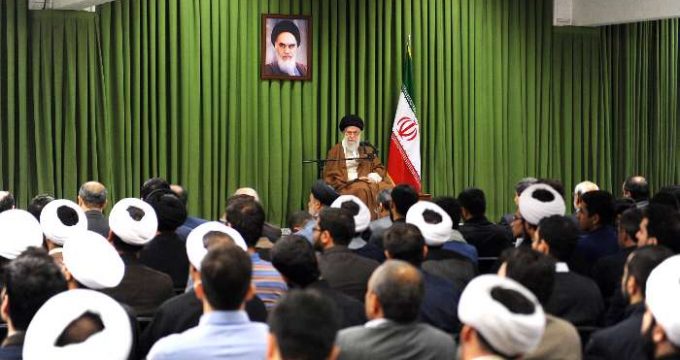 Weekly report: Iran to shred JCPOA if other side tears it up: Leader

Iran will rip nuclear deal to pieces if other party tears it up: Leader

Leader of the Islamic Revolution Ayatollah Seyyed Ali Khamenei has warned that Iran will cut the nuclear deal with six world powers into shreds if the other party chooses to tear it up.

Chief of Staff of the Iranian Armed Forces Major General Mohammad Baqeri held talks on Thursday with the Syrian President Bashar al-Assad congratulating the Syrian Army and armed forces on their recent victory over the terrorists of Daesh.

The Islamic Revolution Guards Corps denounced the “featherbrained” US president for his recent insults against the Iranian nation and his hostile comments about the IRGC, pledging that it will press on with plans to broaden its regional clout and boost Iran’s missile power.

Iran Foreign Minister Mohammad Javad Zarif censured the US administration’s walkaway from the 2015 nuclear deal, saying that the deal is not a bilateral one between Iran and US but an agreement signed by six major world powers and ratified by the United Nations.

Two in three Americans say President Donald Trump should not pull the United States out of the nuclear deal aiming to block Iran from developing nuclear weapons, according to a new CNN poll conducted by SSRS.

Failing of the agreement on the Iranian nuclear program would mean a collapse of the non-proliferation regime, Iran’s Deputy Foreign Minister Abbas Araghchi told the Moscow non-proliferation conference on Saturday.

Iran should reap all benefits of nuclear deal: Austria FM

Austrian Foreign Minister Sebastian Kurz, who is expected to become the European country’s chancellor, has reaffirmed Vienna’s support for a nuclear deal between Tehran and world powers (known as JCPOA).

Earlier Donald Trump refused to officially confirm to the US Congress that Iran is in compliance with the agreement on the nuclear program, but at the same time president did not challenge the compliance of Iran with these agreements on the international level.

Participants of Moscow Nonproliferation Confab (2017) supported the Iran Deal and urged safeguarding it on Saturday.

Iraq’s Foreign Ministry in a statement on Saturday denounced pre-planned onslaught on Iran’s consulate in Erbil and disrespecting flag of a friendly country as well as posing threats to the lives the mission’s staff.

Market figures show that South Korea’s imports of crude oil from Iran hit the highest level in six months in September in a fresh sign that the Islamic Republic is pushing ahead with plans to regain the market share it lost as a result of multiple-year sanctions.

Iran has signed an agreement with Ericsson, the leading provider of communications technology solutions, to use its help in launching the Internet of Things (IoT) across the country.

Italy’s Ansaldo Energia has signed a memorandum of understanding (MoU) with several subsidiaries of the National Iranian Oil Company (NIOC) for converting flare gas into electricity at the supergiant South Pars Gas Field.

Iran’s Ambassador to the United Nations Gholamali Khoshroo says Israel’s occupation of the Palestinian territories is the origin of all problems in the Middle East.

Iraq’s most senior Shia cleric Grand Ayatollah Ali al-Sistani has called on the government to protect the Kurdish population in the north amid rising tensions between Baghdad and Iraq’s secessionist Kurds.

The 9th Summit of the D-8 Organization for Economic Cooperation opened in Istanbul attended by Iranian First Vice-President Eshaq Jahangiri.

Israeli Prime Minister Benjamin Netanyahu is lobbying world powers to support the independence of the semi-autonomous Kurdistan region from the rest of the Iraqi territory, as Kurdish Peshmerga forces are losing ground to Iraqi army forces in the country’s oil-rich northern province of Kirkuk.

A senior Iranian official has reiterated the Islamic Republic’s support for the Palestinian cause, warning about “unfounded excuses” by the United States and the Israeli regime to hinder the current campaign against terrorism in the Middle East.

Photographer Barzin Baharloui will hold an exhibition of photo-collage works at Atbin Art Gallery in Tehran. Titled ‘New Wonder’ (in Persian: Heyrani-e-No), the solo exhibit will open on October 20 and run through the end of the month. Visiting hours are 4 to 9 pm.

UNESCO experts have started assessing Arasbaran Forest in East Azarbaijan Province as part of preliminary studies for the global inscription of the site, following their visit to survey Fars Province’s “Ensemble of Historical Sassanian Cities” that is also on the organization’s tentative list of world heritage sites.

An elderly Iranian woman has bagged a gold and a silver medal in international track and field contests in China.

Director of Business France office in Tehran, Romain Keraval, said all French firms were pioneers in their fields of specialty and could transfer state-of-the-art technologies to Iran.