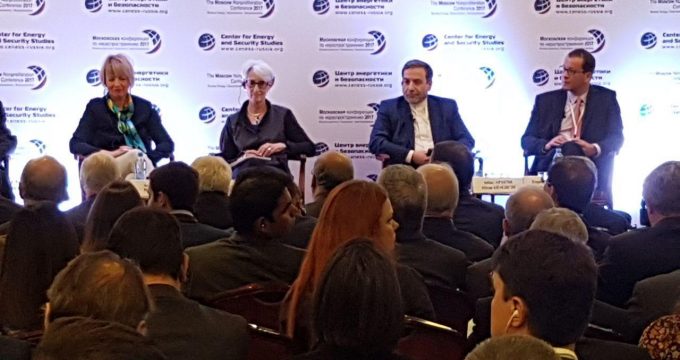 IRNA – Participants of Moscow Nonproliferation Confab (2017) supported the Iran Deal and urged safeguarding it on Saturday.

Secretary-General of European External Action Service Helga Schmid (EEAS) said that she defends the Joint Comprehensive Plan of Action (JCPOA) and since Iran has been committed to it, the deal should be kept.

Former Under-Secretary of State for Political Affairs of the United State Wendy Sherman said in the confab that two thirds of Americans and even part of Republicans support the JCPOA.

Commenting on world convergence against US President Donald Trump’s remarks, Iranian Deputy Foreign Minister Abbas Araqchi said, ‘Two years after signing the Deal, the Middle east is stabilized; without it, the situation in the region would have been much worse.’

Head of Russian Center for Energy and Security Studies (CENESS) Director Anton Khlopkov said without the JCPOA, the talks were still going on; he added that the JCPOA can be used as a model for North Korea.

The Moscow Conference brought together several delegations from 40 countries and international organizations to discuss and brainstorm the most pressing issues related to the international nuclear nonproliferation regime.

The current state of the Nuclear Non-Proliferation Treaty (NPT) and prospects for the 2020 NPT Review Cycle was one of the main topics on the Conference agenda.