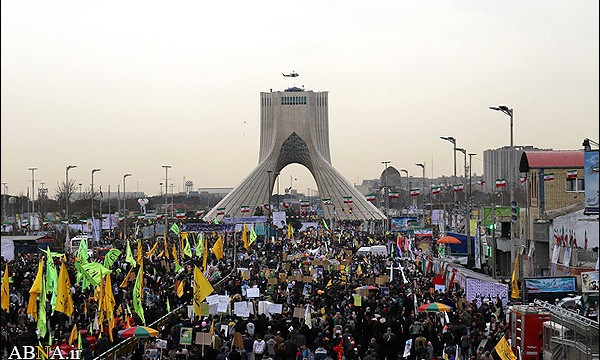 Tehran, November 8, The Iran Project – Iranians massive rallies to mark the 36th anniversary of the former US embassy takeove, Ayatollah Khamenei speech in a meeting with the students on the eve of National Day of Students and President Rouhani remarks at the 21th Press Exhibition inauguration ceremony dominated the country’s media outlets in the past week (2 Nov.-8 Nov.).
Politics
Iran’s president: Nuclear deal model for resolving global problems

Thousands of Iranian university and school students met with the Supreme Leader of the Islamic Revolution, Ayatollah Seyyed Ali Khamenei, on Tuesday.

Iranians are holding massive rallies across the country to mark the 36th anniversary of the 1979 takeover of the US embassy in the capital, Tehran.

Iran and Saudi Arabia clashed repeatedly last week inside the diplomatic talks on Syria, with Iran accusing Saudis of terrorism. Their tension threatened to end the new negotiations just as they began in Vienna on Friday.

With the withdrawal of anti-government forces from key regions of Syria, Iran Khodro is now capable of restoring its sites in the war-torn country, said Iran Khodro ‘s Deputy CEO for Export, Saeed Tafazzoli.

Bolivian President Evo Morales confirmed he will take part in the upcoming summit meeting of the Gas Exporting Countries Forum (GECF) to be held on November 23 in Tehran, Islamic Republic of Iran.

Iran has increased bunkering at its terminal in the Persian Gulf by 30 percent since the beginning of the current Iranian calendar year (March 21), compared to the same period last year.

Iran starts blockade on US goods

Iran’s Minister of Industry, Mine and Trade Mohammad Reza Nematzadeh in a directive to his deputies on Thursday ordered to implement a blockade on imports of consumer goods from the United States.

Iran has signed preliminary agreements with Korean, German and Chinese shipbuilders to construct high-tech LNG tankers as the country pushes to join the club of liquefied natural gas exporters.

Iran and Brazil have agreed to set up a Joint Oil Committee to expand bilateral cooperation as new round of negotiations with Petrobras started discussing deepwater exploration and drilling, said managing director of the Khazar Exploration and Production Company (KEPCO).

Negotiation with US ‘very fact of infiltration’

The IRGC commander-in-chief has told a meeting in University of Tehran some ‘insiders’ advocate negotiating with the enemy.

The chief of staff of the armed forces says the Iranian military will not develop nuclear-capable missiles, as stipulated in the Joint Comprehensive Plan of Action.

The commander of the Air Force of the Islamic Republic of Iran’s Army is in Beijing for a visit to Chinese army and discuss and sign joint agreements between two armies.

Experts serving at the Islamic Republic of Iran Air Force (IRIAF) successfully overhauled three military aircraft, including an F-14 Tomcat fighter jet, which had been grounded for over a decade.

Fatemeh Azadeh, a 26-year old woman from Zahedan, the capital of Sistan and Baluchistan Province, is the first female pilot in Iran, ISNA reported.

Iranian Vice-President for Science and Technology Affairs Sorena Sattari is in Hungary to participate in the World Science Forum (WSF), which is underway in the Central European country’s capital of Budapest.

The Islamic Revolution Guards Corps (IRGC) has detained managers of a number of mobile social networking groups on charge of acting against moral security in the Iranian society.

The Iranian national futsal team will be sent to the Women’s Futsal World Tournament in Guatemala (November 24-29) after intervention by the president and follow-up efforts by the Ministry of Sports and Youth Affairs and the Ministry of Foreign Affairs.

Tehran will host a conference on the Destructive Impacts of War on the Environment on November 10 to mark International Day for Preventing the Exploitation of the Environment in War and Armed Conflict with Foreign Minister Mohammad Javad Zarif and Director of the Environment Protection Organization Masoumeh Ebtekar in attendance.
Regional Affairs

UK Parliament Representative to the United Nations Matthew Rycroft expects that it will be possible to make progress on the settlement of the Syrian crisis in the coming weeks.

A senior leader of the Palestinian resistance movement Hamas has called for a unified leadership by all Palestinian groups in the face of a recent surge in Israeli violence against Palestinians.

Several people were killed or wounded in an explosion in the eastern Lebanese town of Arsal on the border with Syria on Thursday, a security source told AFP.

Iranian Interior Minister Abdolreza Rahmani Fazli described the security of the religious sites in the holy cities of neighboring Iraq as Tehran’s red line, saying that the Islamic Republic will take action if the sites are put in jeopardy by the ISIL terrorist group.

Next Syria talks to be held in Vienna on November 12: German FM

Germany’s Foreign Minister Frank-Walter Steinmeier says a new round of talks aimed at resolving the Syrian crisis is to set to be held in the Austrian capital of Vienna in less than a week.

Saudi King Salman bin Abdulaziz, who is due to arrive in Turkey soon for the upcoming G-20 summit, has reportedly rented the entire Mardan Palace Hotel in the southern province of Antalya for his 18-day stay in the popular tourist destination.