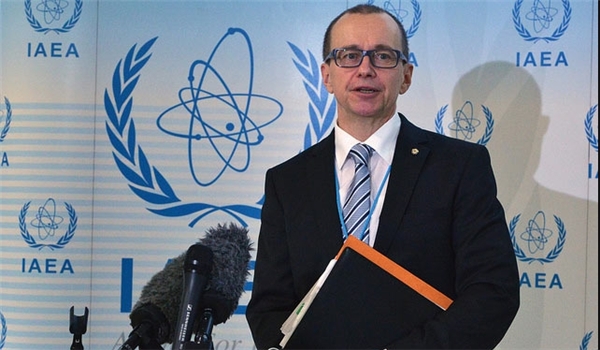 The UN nuclear watchdog said its chief inspector had held “informal” talks in Tehran, ahead of a mid-May deadline for Iran to answer questions on its nuclear program.

The Islamic Republic of Iran and Pakistan have condemned extremism and religious sectarianism as elements undermining stability and security in the region, stressing the need for a joint campaign to fight the scourges.

Iran on Tuesday deplored the US and European states for imposing sanctions on a number of new Russian government officials and business entities, calling them “inefficient”.

Foreign Ministry spokeswoman Marziyeh Afkham here on Tuesday stressed that Tehran is still following up the US decision to deny visa to Iranˈs proposed ambassador to the United Nations Hamid Aboutalebi.

Iranian Foreign Ministry Spokeswoman Marziyeh Afkham rejected the US officials’ claims that Iran’s military progress and missile program is a threat to the neighbors, and said strengthening ties and mutual trust with the neighboring states sets the government’s priority.

Tehran said Tuesday it was canceling a $2.5 billion deal with China National Petroleum Corp. for the development of a giant Iranian oil field, as privileged ties between both nations face mounting challenges.

Rouhani calls for ‘freedom of expression’ for publishers, writers

Iran’s president has said to celebrate books, the government should guarantee the ‘freedom of speech’ for creators of cultural products.

Iranian President Hassan Rouhani has called upon Nicaraguan authorities to prepare the necessary ground for active participation of Iranian businessmen and investors in the Central American country’s trade sector.

Crocodile farming isn’t the most obvious business opportunity in Iran. The wide-jawed reptiles aren’t native to the country, their meat can’t legally be served at home and they don’t have the friendliest reputation.

An official in the International Labor Organization said labor safety indicators have rose by 50 percent in Iran, reiterating that the country holds a good position comparing to 185 members of the organization.