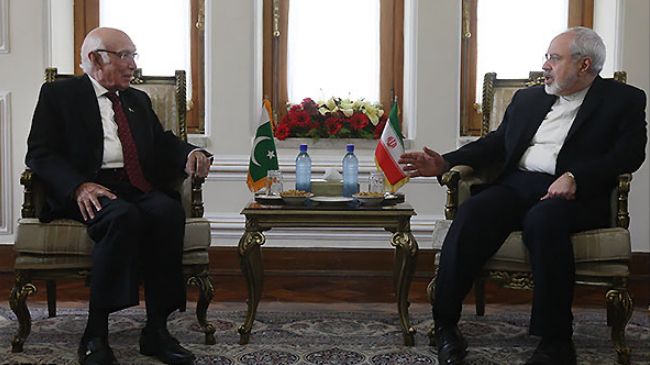 The Islamic Republic of Iran and Pakistan have condemned extremism and religious sectarianism as elements undermining stability and security in the region, stressing the need for a joint campaign to fight the scourges.

In a meeting between the advisor to Pakistani Prime Minister Nawaz Sharif on National Security and Foreign Affairs, Sartaj Aziz, and Iranian Foreign Minister Mohammad Javad Zarif in Tehran on Monday, the two underlined the importance of confronting extremism and religious sectarianism, and exchanged viewpoints on outstanding regional developments as well as cooperation among influential Muslim states.

Zarif described Pakistan as an important neighbor and friend of Iran, and hoped for elaborate preparations for Sharif’s upcoming visit to Tehran.

The top Iranian diplomat further spoke about Tehran-Islamabad bilateral relations and the historical, religious and cultural affinities between the two countries. He also called for further promotion of mutual ties in diverse areas of politics, trade, culture and border security in particular.

Zarif also noted that obstacles in the way of expanding bilateral ties should be removed, and voiced Tehran’s readiness to carry out joint economic projects with Pakistan.

Aziz, for his part, highlighted that Sharif’s visit to Iran would boost the cooperation between the two neighboring countries.

On April 24, Pakistan’s Foreign Office Spokeswoman Tasnim Aslam said that the Pakistani premier will pay an official visit to Iran before May 15.

During a meeting with Zarif on the sidelines of a ministerial meeting of the Developing Eight (D8) group in Islamabad on December 19, 2013, Sharif said Pakistan places strong emphasis on friendly relations with all neighboring countries, including Iran, on the basis of mutual respect for sovereignty and territorial integrity.]