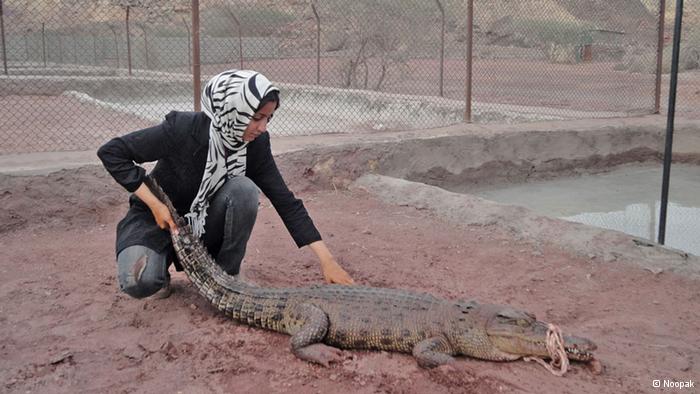 QESHM ISLAND, Iran (AP) — Crocodile farming isn’t the most obvious business opportunity in Iran. The wide-jawed reptiles aren’t native to the country, their meat can’t legally be served at home and they don’t have the friendliest reputation.

That hasn’t stopped one enterprising woman from sinking her teeth into a business that most Iranians would rather avoid.

Mojgan Roostaei’s first-of-its-kind crocodile farm on this southern Persian Gulf island is one of the more eccentric examples of Iranians supporting the Islamic Republic’s plan of pursuing an “economy of resistance,” which aims to create jobs and counter biting sanctions by building up a broader range of exports.

Roostaei started the business with the idea of producing crocodile leather bags, shoes, purses and belts to sell to snappy dressers at home and abroad.

She and husband Behrouz Salarvand also want to produce crocodile meat – for export only because it is forbidden for human consumption under Iran’s Islamic laws.

“I wanted to go after a novel idea, something nobody has touched in Iran before,” Roostaei, a zoologist by training, said while coddling and kissing one of the newborn crocs. “Now my husband and I spend more time raising crocodiles than caring for our only child.”

Breeding crocodiles was outlawed in Iran until 2006, when top clerics approved the practice after veterinary experts offered up economic and technical justifications.

Roostaei and her husband left their home in Tehran four years ago to set up their business on Qeshm Island, a strip of land hugging the Iranian coastline inside the Strait of Hormuz.

The warm and humid climate of the strait, the passageway for a fifth of the world’s oil supply, is ideal for the job of raising the toothy reptiles.

They started out by importing eight young saltwater crocodiles from Malaysia. Soon there were 15 more, than another 20 adults brought in for breeding from Thailand.

Iran’s leaders have long dreamed of reducing the OPEC member’s reliance on oil revenues by promoting exports to earn hard currency and improve an economy dragged down by sanctions.

But the problem of transferring cash abroad due to banking restrictions resulting from the sanctions has forced some eager entrepreneurs like Roostaei and her husband to shift their strategy.

The couple has stopped importing live crocodiles to stock their farm and is now focused on getting the beasts to lay more eggs.

“Our prime target now is to raise as many baby crocodiles as we can,” Salarvand said. He said the couple has 50 crocodiles, including 10 newborns, and expects another 100 babies before year’s end.

“Our plan is to have 1,000 crocodiles in three years. We are after large-scale industrial breeding,” he said.

The novelty of the couple’s farm, once a barren plot of land on the southern shores of the island, has turned it into a tourist attraction in its own right inside Iran.

It now provides jobs for some 20 residents, helping to boost the local economy. Other businesses, including food and water sports vendors, have set up shop nearby.

“It’s really great that a woman has developed a crocodile breeding farm in Iran,” tourist Leila Beheshtipour said on a recent visit. “It’s inspiring for other women.”