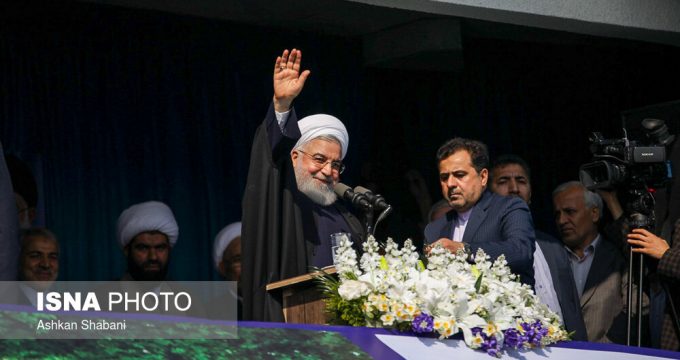 Iran’s coverage: Iran’s problem with US not negotiable: President Rouhani

Iran’s dispute with US non-negotiable, non-compromisable

President Hassan Rouhani said that differences between Iran and the United States are neither ‘negotiable’ nor ‘compromisable’.

Leader of the Islamic Revolution Ayatollah Seyed Ali Khamenei called for absolute prohibition of damage to trees for the purpose of constructing buildings.

Secretary General of European External Action Service Helga Schmid said that signatories of the 2015 Nuclear Deal have stressed their commitment to implement the deal.

Iran in economic, psychological war with US & its allies – President Rouhani

The US is waging an economic and psychological war against Iran in an attempt to topple its government, President Hassan Rouhani said, as he called on the Iranian people to stay strong in the face of this aggression.

A large number of Iraqi tribal chiefs stressed brotherhood between the two nations of Iran and Iraq, saying that they will never allow anybody to launch aggression against their brother Iran.

Deputy FM Abbas Araghchi said before a JCPOA joint commission meeting on Wed. in Vienna that Iran is still unsure how EU’s trade mechanism INSTEX is going to help the country with its economic relations.

The European Union expressed its “resolute commitment” and “continued support” for the 2015 nuclear deal between Tehran and world powers, stressing that it will continue working with the international community to maintain the multilateral accord despite Washington’s withdrawal.

The Permanent Representative of Japan to the International Organizations in Vienna in a message reiterated support for Iran nuclear deal known s the Joint Comprehensive Plan of Action (JCPOA).

Iran and France are set to exchange ambassadors, officials said on Wednesday, after months of tensions including over an alleged Iranian plot to bomb an opposition rally near Paris.

Railways Minister Sheikh Rasheed Ahmad on Wednesday has emphasized the need to strengthen the two-way cooperation between Pakistan and Iran in rail sector.

Ayatollah seyyed Ali Khamenei, Hassan Rouhani, JCPOA joint commission meeting March 6, 2019
Rasht railway starts operation in Dr Rouhani’s presence
Europe and the US are at odds over Iran. Cuba may be next.