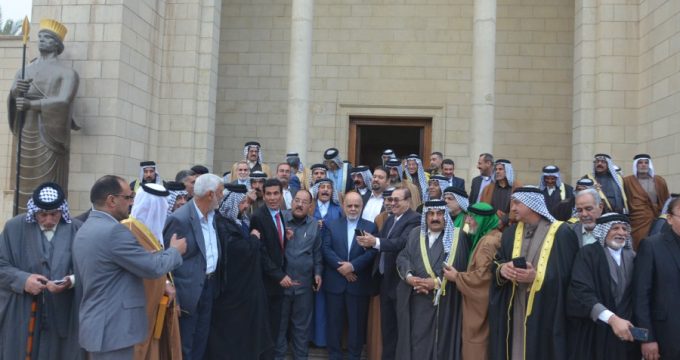 IRNA – A large number of Iraqi tribal chiefs stressed brotherhood between the two nations of Iran and Iraq, saying that they will never allow anybody to launch aggression against their brother Iran.

On the threshold of President Hassan Rouhani’s imminent visit to Baghdad, dozens of tribal chiefs gathered in Iran’s Embassy in Baghdad and appreciated Iran and Supreme Leader’s stance in helping Iraq in fighting Daesh terrorists.

They stressed that they will never leave the Iranian nation alone, as the two nations are brothers.

One of the tribal leaders said that Iraqi nation will never forget Iran’s supports to Iran while fighting Daesh.

“The spirit and body of the Iraqi nation are with the Islamic Republic of Iran and we will never allow any damage reach the Iranian people,” he said.

Iran’s security is that of Iraq and the US and its agents’ dreams to hurt Iran will never come true, he said.

He hailed the unity and brotherhood between the two nations, saying that one of the clear manifestations of the brotherhood is exchange of visits by eight million pilgrims in 2018.

Warning about the enemies’ plots, he called on the two nations to keep vigilance against those seeking to sow discord among them.