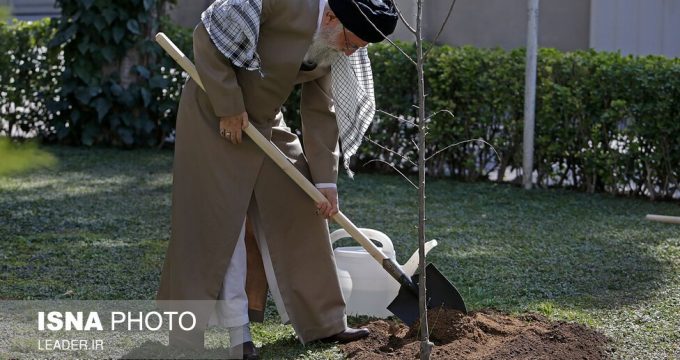 Tasnim – Leader of the Islamic Revolution Ayatollah Seyed Ali Khamenei called for absolute prohibition of damage to trees for the purpose of constructing buildings.

Ayatollah Khamenei planted two fruit saplings in Tehran on Wednesday to mark the Tree Planting Day, and delivered a short speech calling for protection of the environment.

Stressing the need to protect plants and warning against the damages caused by disregard for Iran’s forests and grasslands, Ayatollah Khamenei stated, “The issue of trees and protection of vegetation must reach its real position in the public culture.”

The Leader also hailed tree plantation as a symbolic move highlighting the significance of trees and natural environment.

Deploring damages to trees in some bosky locations in order to construct buildings, Ayatollah Khamenei underscored, “The organizations in charge must seriously stand against such measures and not permit them.”

The Leader also warned against planting harmful species of saplings in certain parts of the country for the purpose of combating desertification, calling on the relevant organizations to prevent such harmful approaches and to push for the protection of woodlands.

Ayatollah Khamenei further urged the judicial bodies to do their utmost to prevent any harm to forests.

Back in November 2015, in a letter to heads of the executive, legislative, and judicial branches of the Iranian government, Ayatollah Khamenei had outlined 15 environmental policies developed in consultation with the Expediency Council in line with implementing the first paragraph of Article 110 of the Islamic Republic of Iran’s Constitution.

Development of an integrated national environmental system and the necessity for comprehensive, coordinated and systematic management of the country’s vital resources (including water, soil, air, and biodiversity) are among the most important policies underlined in the letter.

The general policies call for criminalization of destruction of the country’s environment and punishment for polluters and destroyers of the environment.

Management of climate change and countering environmental threats including desertification, dust pollution, drought, and bacterial and radioactive transmission factors as well as the study and management of emerging environmental phenomena are also among the key points in the general policies.

They necessitated the expansion of “green economy” by laying emphasis on the use of clean energies, organic agriproducts, and waste management as well as the promotion of green public transportation system.

Effective use of international opportunities and incentives on the path toward low-carbon economy and facilitation of the transfer and development of related technologies and innovations are also among the policies outlined by the Leader in the letter.