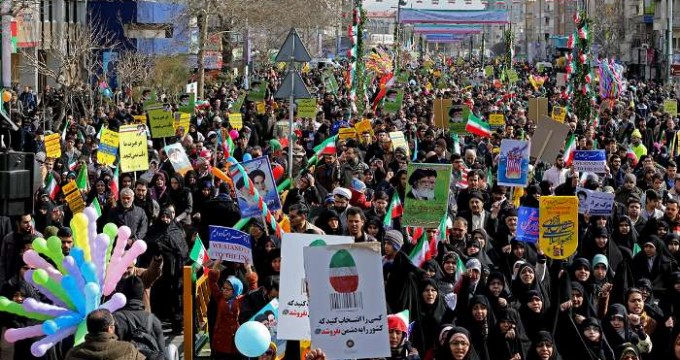 President Hassan Rouhani attended a ceremony here Monday to appreciate the members of the negotiating team for their work during the intensive nuclear talks with the six world powers that led to July deal and ‘Implementation Day’ on January 16.

Leader of the Islamic Revolution Ayatollah Seyyed Ali Khamenei says the top world powers have opposed the Islamic Republic since its inception but have failed to achieve any of their objectives.

President Hassan Rouhani said on Monday that Iran is ready to expand cooperation with European Union, including Greece and that strengthening relations and cooperation between Tehran and Athens are beneficial for both nations.

Europe lacks independent will in face of US: Leader

Leader of the Islamic Revolution Ayatollah Seyyed Ali Khamenei says European countries have no independent will in the face of the United States.

EU ready to expand coop. with Iran on regional peace

Helga Schmid, deputy to the EU foreign policy chief Federica Mogherini, said Mon. Brussels is ready to expand cooperation with Tehran on promoting peace and stability in the region.

Secretary of Iran’s Supreme National Security Council (SNSC) Ali Shamkhani denounced Takfirism (extremism) as part of the West’s policy to spread Islamophobia and said the ideology of the Islamic Revolution is the opposite of Takfiri thoughts.

Iranian Foreign Ministry Spokesman Hossein Jaberi Ansari expressed the country’s fierce opposition to disintegration of any country in the region.

Iran will unveil an upgrade of its Emad ballistic missiles this year, the defence minister was quoted as saying, advancing a programme that has drawn criticism from the United Nations and sanctions from the United States.

Millions of Iranians rally to mark anniversary of Islamic Revolution

Millions of Iranians are taking to the streets in various cities and towns across the country to commemorate the 37th anniversary of the victory of the Islamic Revolution.

Kerry warns against US meddling in Iran elections

On the threshold of parliamentary and Experts Assembly elections in Iran, the US Secretary of State John Kerry has warned against US meddling in the elections.

Iran’s Zarif says normalization of relations with US ‘Possible’

Iranian Foreign Minister Javad Zarif said that Tehran and Washington must make efforts to overcome the wall of distrust that separated Iran and the United States for 40 years.

President Hassan Rouhani said Iran’s banks were the main targets of sanctions in the past few years.

Iran’s defense minister due in Russia for military talks

IRGC underlines continued missile advancements in response to US sanctions

The nuclear deal paved the way for Iran to play its constructive role in promotion of peace and stability in the Middle East and the world, Ghana President John Dramani Mahama said on Sunday.

Parliament Speaker Ali Larijani said that Saudi regime’s plot to plunge crude oil prices from 110 to 22 dollars per barrel has not distressed Iran because of the Islamic Republic’s cutting back its dependency on oil revenues.

Minister of Petroleum Bijan Zangeneh rejected as “illogical” calls for banning participation of foreign firms in Iran’s oil industry stressing that the new petroleum contract models are not a treason to the country.

Iran: UNSC should not sanction world states over fabricated threats

Iran’s Ambassador and Permanent Representative to the United Nations Gholamali Khoshroo has said that UN Security Council’s sanctions should only be imposed on perimeter of UN Charter and not for fabricated threats.

Iran’s windfall from nuclear deal cut in half by debts: U.S. official

Iran gained access to about $100 billion in frozen assets when an international nuclear agreement was implemented last month, but $50 billion of it already was tied up because of debts and other commitments, a U.S. official said on Thursday.

Iran’s average crude oil and gas condensate exports during the first 6 months of the current Iranian calendar year which began on March 21 was 13% higher than that before Iranian President Hassan Rouhani took office in 2013.

Only hours after news emerged that Iran has shipped its first oil cargo to Europe in multiple years as well as an announcement by Tehran that it has made a major rise in its oil production, indications emerged that key OPEC producers have become worried over the already deteriorating conditions in the oil market.

The lifting of sanctions on Iran last month has resulted in a surge of bookings, tour operators say, many from Americans undeterred by a State Department warning laying out the risks of taking trips there.

The bitter social drama ‘Life+1 Day’ by first timer Saeed Roustaei won a total of nine Crystal Simorgh (Iranian mythical flying creature) awards at the closing ceremony of the 34th Fajr Film Festival (FFF), breaking the record for the number of awards won by a movie at any of the previous FFF editions.

Carlos Queiroz will continue his job as Iran coach: Official

Saudi Arabia says US has welcomed troops offer for Syria

Saudi Arabia says the United States has welcomed Riyadh’s offer to contribute troops to a potential ground incursion by a US-led coalition in Syria.

The US-led coalition against Daesh has neither a UN sanction nor Syria’s invitation to wage war on its territory whereas Russia started its operation at the request of President Bashar Assad.

The Syrian Army and the popular forces continued to push back the ISIL militants from their positions in the Southeastern parts of Homs province and took back three key heights following intense battle with the terrorists.

As Turkey and Saudi Arabia edge closer to sending ground forces into Syria at the behest of the United States, Russian Prime Minister Dmitry Medvedev has warned that an escalation of the conflict could lead to world war.

US President Barack Obama and his Russian counterpart Vladimir Putin have agreed to cooperate to implement the Syria agreement reached during talks in Munich, Germany, the Kremlin says.