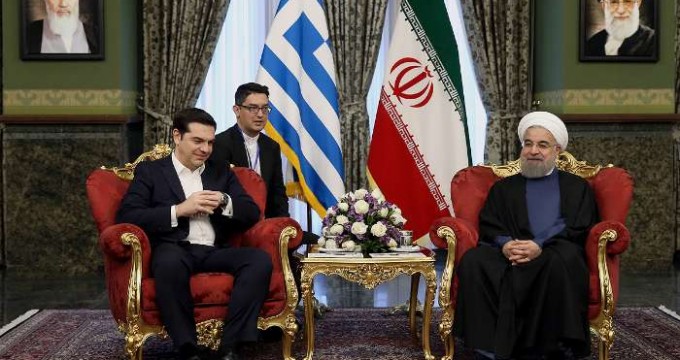 Tehran, Feb 8, IRNA – President Hassan Rouhani said on Monday that Iran is ready to expand cooperation with European Union, including Greece and that strengthening relations and cooperation between Tehran and Athens are beneficial for both nations.

President Rouhani made the remarks in a meeting with Greece Prime Minister Alexis Tsipras.

Referring to growing ties between Tehran-Athens, President Rouhani said that Iran does not consider Greece only a member of EU, at the same time, the two countries made major contribution to the world scientific development.

President Rouhani said that Iran and Greece have wide-range economic capabilities to develop cooperation in all economic, cultural and academic areas.

He underlined necessity of more cooperation between Iran and EU in fight against terrorism and said that it needs a firm resolve of the international community.

Unfortunately, in spite of widescale economic potentials, some western governments have not shown necessary resolve in international campaign against terrorism and currently, a number of states are trying to use terrorists for their short term interests.

President Rouhani expressed Iran’s readiness for more consultations and collaboration with EU and Greece in the field of confrontation with terrorism.

He said that countries supporting terrorism should be convinced that instrumental use of terrorists is wrong and useless and terrorism will finally damage their own interests as well.

He said that the governments must actively participate in strengthening peace and stability in the region and that the international community should try to cut the channels for the financial and arsenal assistance to terrorists.

Tsipras underlined his country’s resolve for expansion of all-out ties with Iran and said that although Greece is a member of EU, it will work beyond the EU framework with Iran.

He said that Greek companies by support of European banks are interested in joint venture investment in Iran in all fields, especially shipping industry, housing and services sectors.

The Greek premier said that cooperation and coordination between countries for fight against terrorism are necessary and that considering Iran’s excellent role in regional stability, Greece will stand by Tehran.

Tsipras expressed his country’s readiness for establishment direct flight between Tehran and Athens and development of tourism relations between the two countries.