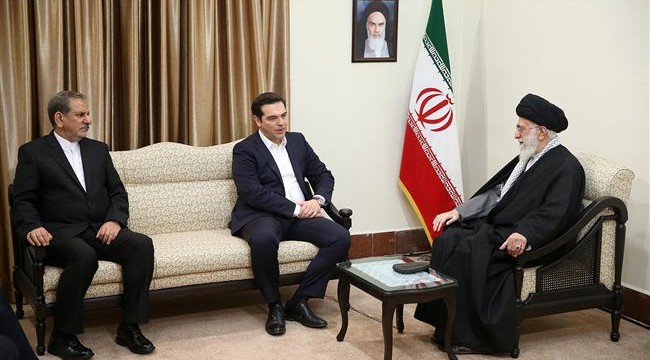 Europe lacks independent will in face of US: Leader

Leader of the Islamic Revolution Ayatollah Seyyed Ali Khamenei says European countries have no independent will in the face of the United States.

“This criticism applies to Europe that contrary to the past, it has no independent will vis-à-vis the US,” the Leader said in a meeting with visiting Greek Prime Minister Alexis Tsipras in Tehran on Monday.

He added that the European countries should address this “weak point.”

Pointing to the foreign-backed crisis in Syria, the Leader said, “Terrorism is a contagious and very dangerous malady which can be contained if it is seriously countered by all. However, some are directly or indirectly assisting the terrorist groups.”

On Iran and Greece’s resplendent cultural and civilization history, the Leader said the Greek premier’s visit to Tehran “can be good beginning to increase the two countries long-term exchanges and cooperation.”

Ayatollah Khamenei said Tehran and Athens have common and convergent stances and highlighted the “independent approach” of the Greek administration.

“I hope that you can overcome the economic problems and this trip would also serve as grounds for the promotion of the interests of both countries,” the Leader said.

Tsipras said his trip to Iran is a turning point in the bilateral ties and signals the common political resolve for stepping up cooperation at all levels.

He added that Ayatollah Khamenei is the leader of a proud and great nation who has played a decisive role in defending the causes and independence of the Iranians.

The Greek premier said the current inter-dependent nature of European countries’ economies makes any change in the status quo very difficult, adding that a shift in the power makeup is required in the European Union to rectify the situation.

Referring to the Syrian issue, he expressed hope for positive developments in the Arab country since acts of terrorism have displaced countless Syrians and triggered an influx of refugees into European states, including Greece.