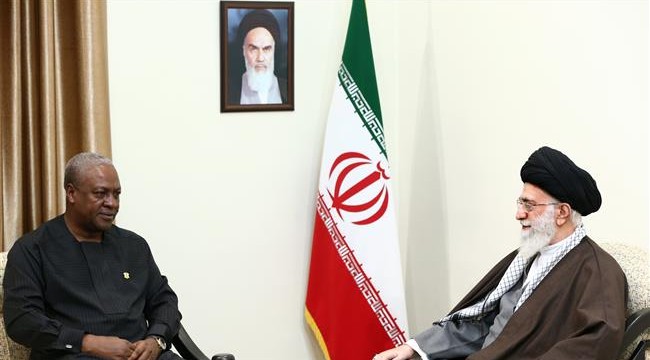 The Leader made the remarks in a meeting with visiting Ghanaian President John Dramani Mahama in the capital Tehran. Iranian President Hassan Rouhani also joined the Sunday meeting.

“Domineering powers oppose warm relations between Iran and Africa and are also the major source of wars, conflicts, and supplies for terrorist groups,” the Leader asserted.

“The cure for all of these problems, however, rests in the gravitation of ‘independent countries’ toward each other and the enhancement of their cooperation.”

“Terrorist groups in our region and Africa are the protégés of American, British, and Zionist spy services,” Ayatollah Khamenei said.

The Leader also raised the question of how the terrorists in Syria were provided with the massive volumes of advanced weaponry and cash that they have been employing against the Arab country.

“The root of all problems is arrogant powers, most importantly the United States, and the Zionist regime is also the epitome of evil,” Ayatollah Khamenei said.

The Leader reaffirmed the Islamic Republic’s unflinching stance of “supporting peace” in Syria and noted that the Arab country cannot be prescribed solutions from the outside.

Mahama hailed the Leader’s remarks as encouragement toward the creation of a peaceful world and said, “Iran’s foreign policy is truly based on respect for [other] nations’ rights to determine their fate.”