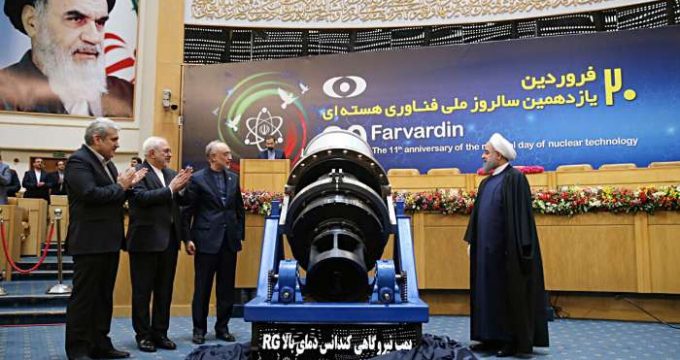 An Iranian-American detained in Iran since last summer has been released on bail of approximately $60,000, the Human Rights Activists News Agency (HRANA) reported Sunday.

Foreign Minister Zarif said US’s lack of commitment under the nuclear deal was not surprising, adding the mechanism of the deal was determined based on mutual distrust between the two sides.

A bill to slap new sanctions on Iran has been delayed in the U.S. Senate due to concerns about Iran’s May presidential election, in which conservative hardliners hope to defeat moderate President Hassan Rouhani, U.S. lawmakers said on Tuesday.

Hojatoleslam Seyed Ebrahim Raeesi, the chief custodian and trustee of the Astan Quds Razavi, a charitable organization holding trusteeship of the eighth Shiite Imam’s shrine, would seek the presidency in Iran’s upcoming election.

Caretaker of Iran’s Hajj and Pilgrimage Organization Hamid Mohammadi and Saudi Minister of Hajj and Umrah Mohammed bin Saleh bin Tahir Benten reviewed in a meeting details about providing due services to the Iranian pilgrims during 2017 Hajj rituals.

Iranian Foreign Minister Mohammad Javad Zarif lashed out at the US for its airstrikes against a Syrian airbase in Homs province, warning that it sets a precedence for similar acts in future.

An Iranian naval flotilla left the country for waters off the coasts of Oman to attend a joint drill with the Arab country in which the two sides will exercise maritime rescue and relief operations, an Iranian commander said.

Foreign Ministry spokesman Bahram Qasemi said on Saturday that allegations made by the Jordanian king against Iran reveals that he makes strategic blunder in defining terrorism and his statements are indicative of his sallow attitude towards regional developments.

Boeing Co. said on Tuesday it has signed a new, $3 billion deal with Iran’s Aseman Airlines to supply 30 737 MAX aircraft to the carrier, the first major sale by a U.S. company to the Islamic Republic under new President Donald Trump.

Iran oil exports not to be affected by possible cut in Indian purchase: Minister

Iranian Oil Minister Bijan Namdar Zanganeh played down threats by India that it will cut oil imports from the country if an Indian company does not win a project to develop Iran’s Farzad-B gas field, making it clear that many other customers are already vying to buy Iranian crude.

BP says got US license to operate Rhum field

UK’s energy giant BP says it has received an authorization from the United States to go ahead with operating a gas field that it jointly owns in the North Sea with the National Iranian Oil Company (NIOC).

According to Western media the US launched dozens of cruise missiles Thursday night on a Syrian airfield in response to the alleged use of chemical weapons in Khan Shaykhun near Idleb.

US aggression will never impact axis of resistance: Hezbollah

US aggression against Syria can never have any negative effect on the axis of resistance which supports the state in Damascuss in its war against the terrorist groups, Lebanese Hezbollah movement said in a statement released on Friday.

Iranian President Hassan Rouhani called on Saturday for an impartial probe of this week’s suspected chemical weapons attack in Syria and warned that U.S. missile strikes in response risked escalating extremism in the region.

The US missile strike in Syria “only facilitated the strengthening of terrorism,” Russia’s representative at the UN Security Council has said, adding that it shows Washington is “afraid” of a “real investigation” into an alleged chemical attack in Syria.

Chief of staff of Armed Forces Major General Mohammad Baqeri in a telephone conversation with his Russian counterpart General Valery Gerasimov on Saturday condemned US missile operation against Syria and called it decisive violation against an independent state and underlined that fight against terrorism will continue and intensify.

A magnitude 6.1 earthquake struck 76 km east-southeast of the city of Mashhad in northeastern Iran on Tuesday, the U.S. Geological Survey (USGS) said.

The first two weeks of the Iranian New Year (which starts on March 20 or 21) is a major travel season with the highest number of holidaymakers along with road accidents.

Fire, sole cause of Plasco collapse

President Hassan Rouhani has said national report preparation in any incident should be a regular response to the incidents to provide transparent information to the public.

Runners began racing in Iran’s first international marathon Friday, which was billed as an opportunity for “building bridges, breaking barriers” though no American runners are participating.

Shushtar is a city in Khuzestan province, southwest of Iran. Shushtar owes much of its fame to its historical hydraulic system. This system has been registered in UNESCO’s list of World Cultural Heritage Sites in 2009, referred to “as a masterpiece of creative genius.”