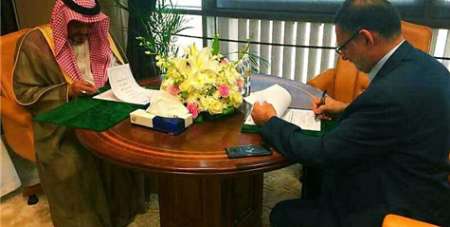 IRNA – Caretaker of Iran’s Hajj and Pilgrimage Organization Hamid Mohammadi and Saudi Minister of Hajj and Umrah Mohammed bin Saleh bin Tahir Benten reviewed in a meeting details about providing due services to the Iranian pilgrims during 2017 Hajj rituals.

The meeting also focused on the issue of acceleration of following up the Mina tragedy in 2015 when about 500 Iranian pilgrims were killed in a stampede during the Hajj annual congregation.

The two sides exchanged views on issuing e-visa for the Iranian pilgrims, their transfer and providing them with food and medicine during this year’s Hajj.

Iranian Minister of Culture and Islamic Guidance Reza Salehi-Amiri has recently reiterated that ensuring the pilgrims’ security, paying the blood money to the families of those who were killed during the 2015 Hajj rituals and preserving the Iranian pilgrims’ dignity are Iran’s conditions for attending the Hajj congregations.

According to Hajj and Pilgrimage Organization, more than 86,000 Iranian pilgrims are to travel to Saudi Arabia this year to perform Hajj rituals.