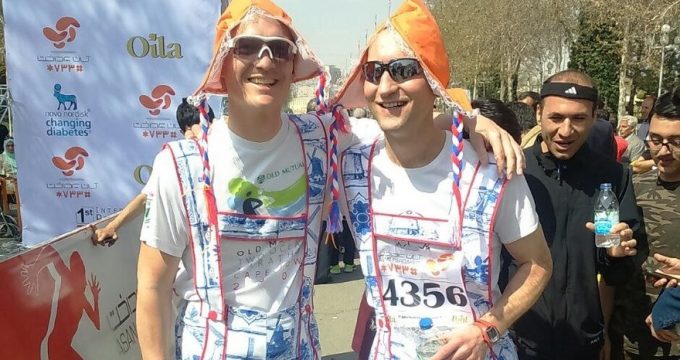 AP – Runners began racing in Iran’s first international marathon Friday, which was billed as an opportunity for “building bridges, breaking barriers” though no American runners are participating.

Iran’s Track and Field Federation chief Majid Keyhani had said Wednesday there was no ban on any nationality in what he called the “Persian Run.”

The course takes male runners from the Azadi Sports Complex through the Azadi square in western part of the Iranian capital. Women will run separately and indoors, inside the Azadi sports complex.

The race’s website listed 28 Americans among the registered runners, along with participants from more than 40 countries, including Britain, Canada and Saudi Arabia.

“We have sent all runner names to Iran’s Foreign Ministry for issuing visas,” Keyhani said.

Iran stopped issuing visas to U.S. citizens after President Donald Trump first announced a travel ban on Iranians and citizens of six other Muslim-majority countries in January. Tehran later allowed American wrestlers to travel to Iran to participate in a world championship.

American marathon enthusiast Charlie Barkowski, 35, who is based in Greece, said he signed up for the race in January. He had traveled to Iran a few years back and was looking forward to returning to complete his 52nd marathon.

As recently as Tuesday, he said organizers had told him they were still hopeful he would get his visa. But it never came through.

“I submitted everything and just waited. … I even had my bags packed,” he told AP. “I’m very disappointed. I made friends from Iran form before and was really looking forward to going back.”

No professional runners participated this year. Keyhani expressed hope they would in the future.

Women running in the race are required to wear a headscarf or sports bandanna that covers their hair, according to the race website. It also encourages them to wear long-sleeve t-shirts that cover their hips and to avoid shorts or skirts.

Since the 1979 revolution, Iran has required women to wear the Islamic headscarf and to only show their face, hands and feet in public. They are typically not allowed to participate in sporting events outside of enclosed facilities, ensuring they are not seen by men.