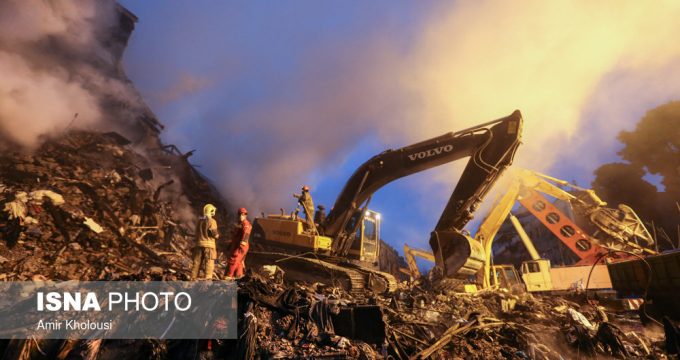 Fire, sole cause of Plasco collapse

MNA – President Hassan Rouhani has said national report preparation in any incident should be a regular response to the incidents to provide transparent information to the public.

Mr. Rouhani received the members of the National Plasco Report Special Committee Wednesday evening; the report had been prepared after the president issued a directive mandating the Committee to look into the event and draft a comprehensive report to provide to the public; “the report is a feat of excellence given the limited time and the scope and complexity of the incident; it is significant since for the first time in country, an independent expert tribunal investigated the issue without any political pressures by the vested interests in the event,” said the president.
“The report however should not be seen as definitive and the government ministries and other organizations named in the report would contribute to the report by possible responses and or proposals to improve the report,” Mr. Rouhani added. “The report is in line with the requirements of the Citizens’ Rights Charter where it highlights the public right to question government and Establishment and their right to receive information almost in any incident; the right to safety and security also provides another impetus to the preparation of the report.”
Rouhani also said that partisan interests should not be a factor in examining incidents of national scope and importance; “the Committee had not been subjected to any pressure by the government and the report thus is the results of their expert opinions and examination of the event’s diverse aspects,” he told the meeting. “Members had prepared the report freely and according to their code of conduct and conscience.”
“The report,” Rouhani believed, “will greatly contribute to the restoration of public trust and national assets.” The report itself however, implicates different organizations and government ministries and Tehran Municipality in the incident in one way or the other. It categorically rejects the hypothesis that ‘explosives’ had been used in downing (possibly a deliberate action) the building and asserts that solely fire and heat had been the causes of the collapse.
The owner of the building, Mostazafan Foundation had been lax in the face of warnings by authorities on the possibility of disasters; the Municipality is equally implicated by the report as failing to effectively enforce the implementation of Section 14 of Article 55 of Municipality rules and relevant regulations; the Municipality had been systematically negligent in enforcing Section 22 of the National Building Regulations, which addresses the safety of the building and maintenance operations.
Enforcing regulations by the owner and the Municipality had been possible in Plasco Building without affecting the businesses; Ministry of Labor had fallen short of enforcing its share of the job in technical inspection of the building’s safety measures against incidents; it violated its inherent and statutory duties which was a factor in Plasco collapse; historically, Ministry of Urban Planning had been lax in enforcing provisions of the National Building Regulations, with Interior Ministry also equally being subject to reprimand accordingly.