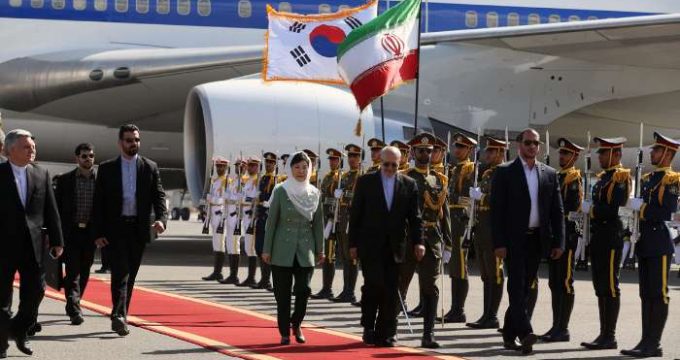 South Korean President Park Geun-hye arrived in Tehran on Sunday and was welcomed at Mehrabad Interantional Airport by Minister of Industries, Mines and Trade Mohammad-Reza Nematzadeh.

Iran’s exports of oil and gas condensates have reached 2.3 million barrels per day (bpd), almost twice as much as before the Joint Comprehensive Plan of Action (JCPOA), a nuclear deal between Tehran and world powers, came into force, Iranian President Hassan Rouhani said.

Iranian Foreign Minister Mohammad Javad Zarif described economic predicaments and presence of terrorists in Iraq as the major issues the Arab country is facing, stressing the need for regional assistance for resolving the problems.

A senior Iranian lawmaker says the baseless ruling by the Supreme Court of the United States authorizing the seizure of about USD 2 billion of Iran’s frozen assets in the US is a serious threat to international law.

US electronic commerce company Amazon says it will suspend the accounts of several Iranians who shopped on its website.

May 1 Iran’s oil exports to South Korea have more than quadrupled to 400,000 barrels a day since international sanctions were lifted in January, Oil Minister Bijan Zanganeh was quoted as saying on Sunday by the Shana news agency.

Iran cancels all flights to the Iraqi capital after demonstrators broke into the heavily-fortified government complex in the Green Zone in Baghdad, Head of Iran’s Hajj and Pilgrimage Organization Saeed Ohadi says.

Iranian Petroleum Minister may hold a meeting with his Russia counterpart before the OPEC member states forthcoming summit.

Iranian Parliament approved a legislation to boost the country’s defense capability with the aim of providing national security and interests.