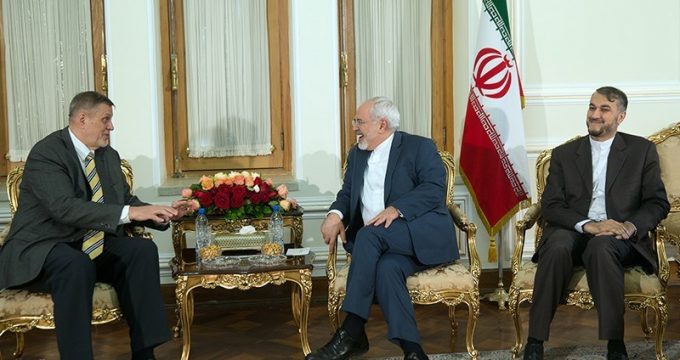 TEHRAN (Tasnim) – Iranian Foreign Minister Mohammad Javad Zarif described economic predicaments and presence of terrorists in Iraq as the major issues the Arab country is facing, stressing the need for regional assistance for resolving the problems.

The regional countries and the United Nations need to join hands to find a logical way out of the problems that have beset the Iraqi nation, the top Iranian diplomat told UN Special Representative for Iraq Jan Kubis in a meeting in Tehran on Saturday.

He also referred to the campaign against terrorist groups in Iraq, particularly Daesh (ISIL), as an overriding priority, voicing Iran’s preparedness to contribute to the fight.

Zarif further bemoaned outsiders’ view on Iraq which causes the Iraqi people to stay on the sidelines.

For his part, Kubis hailed Iran’s constructive role in helping the UN resolve the problems in Iraq.

Iraq has been engaged in the fight against the Daesh Takfiri terrorists since the summer of 2014, when the militants took control of the major city of Mosul in the north of the country and some other areas in the country.

However, a combination of concentrated attacks by the Iraqi military and the popular forces, who rushed to take arms after top Iraqi cleric Ayatollah Ali al-Sistani issued a fatwa calling for fight against the militants, blunted the edge of the Daesh offensive and led to the liberation of many areas.