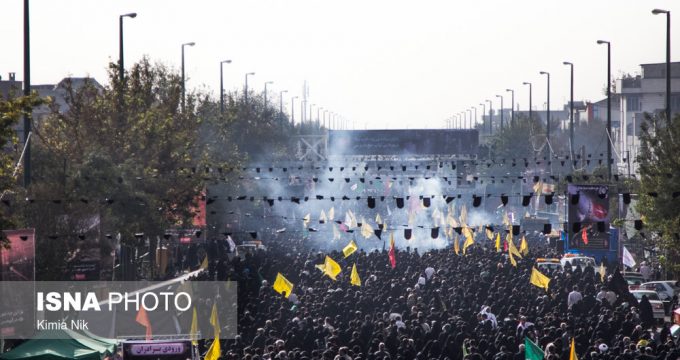 Leader of the Islamic Revolution Ayatollah Seyyed Ali Khamenei has made three new appointments in the Iranian Army.

President Hassan Rouhani said on Monday that Tehran welcomes expansion of defensive and military cooperation with Islamabad hoping that such cooperation will lead to bolstering of political, economic and cultural cooperation between the two countries.

Iranian President Hassan Rouhani says the Islamic Republic will always stand by Lebanon and spare no effort to help improve the country’s stability.

The US envoy to the UN has blamed Iran for the recent Yemeni Houthi rebel attack targeting Saudi Arabia in a claim repeatedly denied by Tehran.

The European Union will make sure that the Iran nuclear deal “will continue to be fully implemented by all, in all its parts”, the European Union’s foreign policy chief said on Friday.

An international conference on security and sustainable development opened in Uzbekistan on Friday with Iranian Foreign Minister Mohammad Javad Zarif in attendance.

A Sukhoi-22 fighter jet belonging to the Islamic Revolution Guards Corps (IRGC) has crashed in southern Iran near the city of Sarvestan, Fars Province.

Iran”s President Hassan Rouhani expressed pleasure with the regional nations’ victories over the terrorist groups and plots to disintegrate their countries, and said that the US and Israel are angry with these successes.

A terrorist attack on the Arbaeen pilgrims was thwarted on Thursday in a region in eastern Iraqi province of Wasit, security sources announced.

More than 13 million gather in Karbala for Arbaeen

Iraq’s top Shia cleric says more than 13 million have gathered in the holy city of Karbala to mark Arbaeen, the annual commemoration marking the end of the mourning period for the martyrdom of Imam Hussein, the Prophet Muhammad’s grandson and a central figure in Shia Islam.

Lebanese President Michel Aoun says Prime Minister Saad Hariri, who announced his resignation in a broadcast from Saudi Arabia, has been “kidnapped” and must have immunity.

Abadi: Anti-Daesh campaign has inflicted $100 billion in losses on Iraq

Iraqi Prime Minister Haider al-Abadi says the military campaign against the Daesh Takfiri terrorist group has cost the conflict-stricken Arab country $100 billion worth of damage as government forces, backed by fighters from the Popular Mobilization Units, are driving the extremists out of their last redoubt in the country.

Ministry of Cooperative, Labor and Social Welfare announced on Monday that authorization for the occupation of experts and directors of ‘Total-Iran BV’ Oil Company have been issued.

The CEO of Iran’s MAPNA Group Abbas Aliabadi says the company has signed an initial agreement with the US multinational conglomerate General Electric.

Iran has taken delivery of the second F-class gas turbine from German engineering group Siemens for use at a 600-megawatt power station being built in Bandar Abbas.

A 70-strong delegation of senior European officials and business leaders is in Tehran to examine capacities for further expansion of trade ties.

Former US Congresswoman in Iraq for Arba’een Walk

A former American congresswoman, known for her anti-war stances, is in Iraq to attend the Arba’een walk, where she has to travel from Najaf to Karbala on foot.

Iranian Foreign Minister Mohammad-Javad Zarif here on Tuesday evening expressed hope that ‘kindness and peace’ could be established across the world, it was reported Wednesday morning.

Polo, Kamancheh to be added as Iran’s intangible cultural heritages to UNESCO lists

The team sport of polo, which is played on horseback, together with the Iranian bowed string instrument of Kamancheh are set to be added to the United Nations Educational, Scientific and Cultural Organization (UNESCO) Intangible Cultural Heritage Lists by the end of the current year.

A movie about a young girl whose fantasy world helps her escape the hard realities of growing up in the countryside near Tehran in the aftermath of the 1979 Islamic Revolution is Iran’s first-ever submission for the Academy Awards’ foreign film directed by a woman.