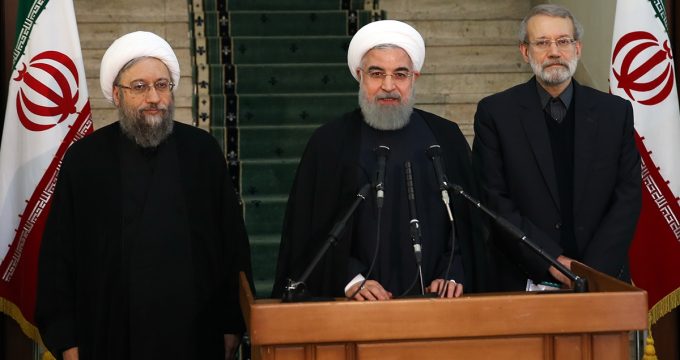 FNA- Iran”s President Hassan Rouhani expressed pleasure with the regional nations’ victories over the terrorist groups and plots to disintegrate their countries, and said that the US and Israel are angry with these successes.

“Today, the Iraqi, Syrian and Lebanese people, supported by their armies and the friendly states, specially the Islamic Republic of Iran, could almost get rid of problems, and the terrorism issue is coming to an end as no other city is in the hands of the ISIL and other terrorists anymore, and they (the terrorists) will be annihilated in the near future,” President Rouhani told reporters after a meeting with the heads of the legislative and judiciary in Tehran on Saturday.

Stressing that the enemies also failed in their plots to disintegrate the regional states and change their geographical borders, he said, “Therefore, today we are witnessing a major success in the region and the US and the Zionist regime and their allies are naturally sad and enraged with these successes.”

“The conditions in the region show that plots have fallen flat and therefore, they are after other plots in the region and people are needed to keep vigilant,” President Rouhani said.

In relevant remarks in October, Secretary of Iran’s Supreme National Security Council (SNSC) Ali Shamkhani blasted the US officials for their unfounded allegations concerning the ongoing campaign against terrorism and extremism in the region, and said that Washington and Tel Aviv are doing their utmost to hinder the resistance front’s removal of the terrorist groups.

“The US and the Zionist regime of Israel feel threatened by any balance shift in the region in favor of regional people and governments engaged in the fight against terrorism,” Shamkhani said in a meeting with Deputy Head of Hamas Political Bureau Saleh al-Arouri in Tehran.

The SNSC secretary expressed the hope that Hamas would continue its revolutionary approach and battle against the Tel Aviv regime and said Takfiri groups and their allies have regretfully carried out inhumane and non-Islamic measures which have tarnished the image of Islam.

Shamkhani emphasized that any measure which would result in the Palestinian cause losing its status as the first priority of the Muslim world or promote reconciliation with the Israeli regime would be an unforgivable act of treachery against all Muslims.