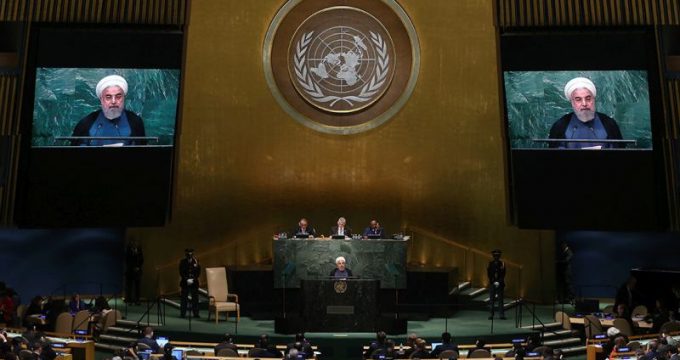 Chief of Staff of the Iranian Armed Forces Major General Mohammad Hossein Baqeri underlined that the United States’ largest military aid package in its history ($3.8bln) to Israel has persuaded Iran to further advance and increase its defense power.

Commander of the Islamic Revolution Guards Corps Aerospace Force Brigadier General Amir Ali Hajizadeh announced that the country put on display a number of state-of-the-art missile systems and military equipment during the nationwide parades on Wednesday.

UN Secretary General Ban Ki-moon during his meeting on Wednesday with President Hassan Rouhani called for Iran’s help to end the ongoing crises in Syria and Yemen.

Iran and the 5+1 held their fifth joint commission in deputy foreign ministerial level Wednesday noon local time in the US city where the 71st United Nations General Assembly meeting is underway.

Iranian President Hassan Rouhani criticized the United States’ lack of compliance with the July 2015 nuclear deal between Iran and world powers, known as the JCPOA, stressing that Washington’s flawed approach should be corrected immediately.

Iranian Foreign Minister Mohammad Javad0 Zarif and his US counterpart John Kerry had a brief bilateral meeting on the sidelines of the foreign ministerial meeting of the Group 5+1 (the US, Russia, Germany, France and Britain plus Germany) on Thursday.

A senior Iranian commander says the country’s air defense forces have warned off an American U2 spy plane trying to fly over Iran’s borders.

Zarif: America did nothing to meet its JCPOA commitments

Iranian Foreign Minister Mohammad Javad Zarif said while Iran has stayed faithful to its commitments based on the Joint Comprehensive Plan of Action (JCPOA), the US has made no real efforts to this end.

Russia’s second-biggest oil producer Lukoil says it is preparing to present Iran with the findings of its studies over two oil fields in the country – a move which could lead to awarding the development of the fields to the company.

German engineering group Siemens says it has shipped the first F-class gas turbine to Iran for the construction of a power plant.

Iran says it expects the proceedings to purchase planes from US aviation giant Boeing to proceed faster than those with Airbus.

Airbus, Boeing representatives due in Tehran later this month: Minister

Iranian Minister of Road and Urban Development Abbas Akhoundi said Saturday that representatives of Airbus and Boeing will travel to Tehran later this month to finalize talks on Iran’s purchase of passenger planes.

Ayatollah Khamenei has issued a message of appreciation and congratulation to the athletes who participated in Rio 2016 Paralympics games and acquired several medals.

Eram Garden, an image of paradise

The idyllic Eram Garden (Bagh-e Eram) in Iran’s southern city of Shiraz is a striking location for visitors with a variety of plants as well as a historic mansion.

President Hassan Rouhani on Saturday put a question to the students on Saturday on the occasion of the beginning of the new school year in Iran.

Faced with mounting environmental challenges, Iran is implementing an ambitious program to reduce greenhouse gases and restore dried wetlands, but it would benefit from more international cooperation, including a resumption of lending by the Global Environment Facility (GEF), a senior official says.

A former US Senate foreign policy analyst said Western powers, like the US, Britain and France, are not only fully aware of the Riyadh regime’s genocide in Yemen but also supporting the oil-rich Kingdom in return for petrodollars.

US apologizes to Bashar Assad for airstrike on Syrian troops

“Yes, they [the US] have apologized” for the airstrike on Syrian troops, which killed dozens, Russian Foreign Minister Sergei Lavrov said during an interview with the TV channel Rossiya-1, as reported by Sputnik.

An Iranian diplomat says Tehran welcomes as a step forward the recent landmark agreement between the Afghan government and Gulbuddin Hekmatyar, the leader of a militant group.

Syrian Foreign Minister Walid al-Muallem said the Syrian Army is taking wide strides in its war against terrorism, with the support of Iran, Russia and the Lebanese Hezbollah resistance group that are “the true friends of the Syrian people”.

Iranian Foreign Minister Mohammad Javad Zarif said that the Saudi regime is funding Daesh (ISIL or ISIS) and Jabhat Fateh al-Sham, formerly known as al-Nusra Front, warning that the terrorist groups would one day come back to haunt the kingdom.