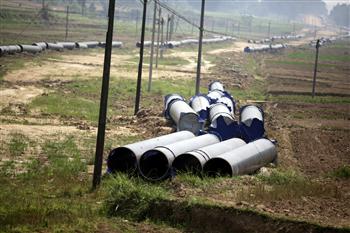 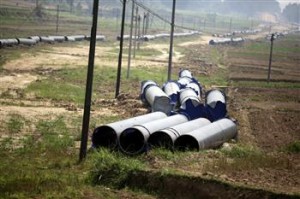 An Iranian semi-official news agency says the country has started building a $10 billion natural gas pipeline to Syria as part of efforts to boost its energy sector that has been battered by international sanctions. The 1,500 kilometer (750 mile) pipeline will pass through Iraq before reaching Syria. It says Iran begun construction of the first phase of the project involving a 225 kilometer (140 mile) stretch at an estimated cost of $3 billion.

Iran is ready for new talks with global powers on its nuclear program but the United States and others seeking to rein in its uranium enrichment activities need to be more constructive, Tehran’s ambassador to Russia said on Monday.

During the first months of imposing sanctions we had to tolerate heavy pressures but today the situation has changed; our situation is desirable in comparison to past two months but there is no doubt that it well improve more and more. Rostam Qasemi made the remarks today in Assaluyeh, onshore installations of South Pars gas field, during a visit by members of Commission of Industries and Mines of the parliament, adding the enemy intends to hinder economic development of the country.

Iran’s Supreme Leader Ayatollah Ali Khamenei said that if the Syrian opposition is willing to put down the weapons, then the Syrian government can hear out its position, Fars reported. Ayatollah Khamenei made the remarks during the meeting with officials of Iran’s Hajj and Pilgrimage Organization.

Ahamdinejad: Our duty is to prevent massacre in Gaza

Iranian President Mahmoud Ahmadinejad has spoken with his Egyptian counterpart Mohammed Morsi and thanked him for his efforts to bring about a ceasefire. “Our human and religious duty is to prevent the massacre of the innocent people in Gaza, and to bring peace and security to the Gaza Strip and the other Palestinian territories,” Ahmadinejad said.

An Iranian diplomat said on Sunday Iran had unloaded fuel from its first atomic power plant as part of a normal technical procedure linked to transferring responsibility for the plant from Russian engineers. The U.N. International Atomic Energy Agency said in a report two days ago on Iran’s nuclear program that fuel was unloaded from the Bushehr plant in October and transferred to a spent fuel pond.