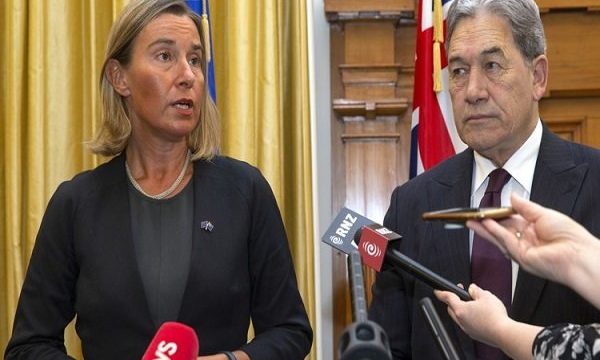 Iran’s coverage: EU does its best to keep Iran benefiting from JCPOA: Mogherini

The European Union Foreign Policy Chief Federica Mogherini said the EU is encouraging enterprises to increase their business with Iran, as that country has been compliant with their nuclear-related commitments.

President: Europe standing up to US today

President Hassan Rouhani said on Monday that Europe is today standing up to the US.

President Hassan Rouhani said the forex rate of 42,000 rials will be for essential goods.

Sanctions can lead to boost in Iran’s economy: Larijani

Iranian Parliament Speaker Ali Larijani described Washington’s new sanctions against the Islamic Republic as an opportunity for “the internal renovation of the country’s economy”.

Assembly of Experts: Iranian nation does not let saboteurs reach their goals

Iran’s Assembly of Experts in a statement on Monday announced that the vigilant Iranian nation does not let ill-wishers and saboteurs create disturbance to the public order and security.

Iranian Foreign Minister Mohammad Javad Zarif has held separate meetings with the newly-appointed secretary-general of the Parliamentary Union of the OIC Member States and the outgoing Secretary General of the Economic Cooperation Organization.

Trump says anyone trading with Iran will not trade with U.S.

President Donald Trump said on Tuesday the new U.S. sanctions on Iran were “the most biting sanctions ever imposed”.

Syria reiterated its full solidarity with Iran in the face of the hostile policies of the US administration which re-imposed economic sanctions on Iran.

Donald Trump, Federica Mogherini, US sanctions against Iran August 7, 2018
Forex drops to 8074t/1$ in secondary currency market
Why are Iranians unhappy with the Elysee Palace?