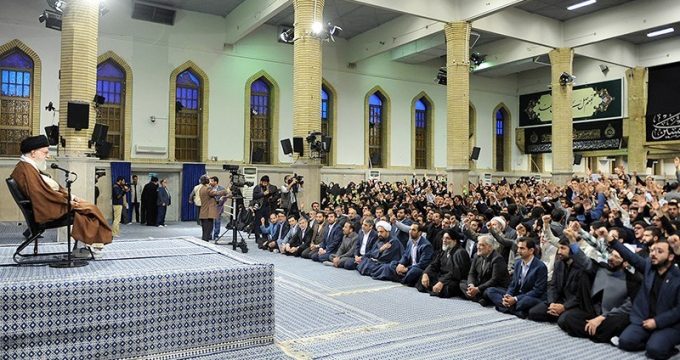 Leader of the Islamic Revolution Ayatollah Seyyed Ali Khamenei has slammed US President Donald Trump’s “foolish” remarks against Iranian people, saying such a stance is a clear sign of Washington’s hostility towards the entire nation.

Russia and Iran have signed agreements to collaborate on “strategic” energy deals worth up to $30bn that will involve energy groups such as Rosneft and Gazprom.

Boris Johnson will travel to Washington next week in a bid to persuade US senators not to abandon the Iran nuclear deal or to impose fresh sanctions against Tehran that could jeopardise the deal.

Iran’s Supreme Leader Ayatollah Ali Khamenei said during his meeting with Russian President Vladimir Putin that there are various ways to nullify US sanctions.

Iran Leader receives thousands of students ahead of Student Day

Supreme Leader of the Islamic Revolution Ayatollah Seyyed Ali Khamenei met on Thursday with thousands of school and university students on the eve of the national Student Day which falls on November 4 this year.

No meeting held between Zarif, Tillerson during UNGA 72

Foreign Ministry Spokesman Bahram Qasemi reiterated that no meeting took place between Foreign Minister Mohammad Javad Zarif of Iran and US Secretary of State Rex Tillerson on the sidelines of the UN 72nd General Assembly in New York.

At the conclusion of a trilateral summit in Tehran, the presidents of Iran, Russia and Azerbaijan issued a joint statement and threw their weight behind the 2015 nuclear deal between Tehran and world powers.

Leader of Islamic Revolution Ayatollah Khamenei said Thu. that the US is doing its utmost to ruin the outcome of nuclear negotiations, which proves Washington’s deep antagonism toward the Iranian nation.

Tehran braces for coop. with Baku in Caspian oil exploration