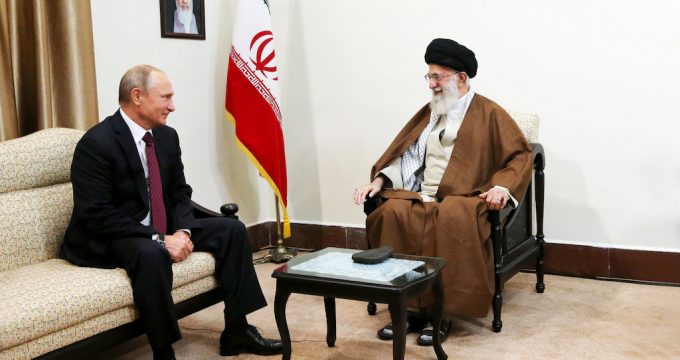 While in Tehran, Putin, who so far has traveled to Tehran three times, held meetings with his Iranian counterpart Hassan Rouhani and Supreme Leader of the Islamic Revolution Ayatollah Seyyed Ali Khamenei.

On the same day, Chief of Staff of the Iranian Armed Forces Major General Mohammad Baqeri also officially welcomed his Russian counterpart Valery Gerasimov in Tehran, discussing issues such as, modern diplomacy, Iran-Russia defense diplomacy and the way to fight terrorism and Iran and Russia are reviewed Syrian issue and giving aids to the Resistance Front.

In a meeting with Putin, Iran’s Supreme Leader said the outcome of Iran-Russia cooperation on Syrian issues proved that Tehran and Moscow can achieve common goals during challenging situations.

The Leader welcomed President Putin’s offer to further expand cooperation with Iran in all areas, stressing the useful experiences of recent years in bilateral relations and settlement of regional crises have to be used for expansion of ties.

Meanwhile, talking to Putin, President Rouhani stated that Russia is regarded as Iran’s friend, neighbor and strategic partner and Iran is determined to broaden all-out relations and cooperation with Russia.

Relations between Tehran, Moscow and Baku for the expansion of regional relations and cooperation in various fields is of prime importance, President Rouhani added.

Besides, Rouhani  underlined Russia’s role in safeguarding the Iran nuclear deal, known as the Joint Comprehensive Plan of Action (JCPOA), noting that  “Russia plays a significant and instrumental role in reinforcing and safeguarding the JCPOA and [ensuring] the implementation of the deal by all sides.”

Putin, for his part, said Iran and Russia maintained good cooperation in the fields of energy, economy, peaceful nuclear energy and transportation.

The Russian president reiterated that Russian companies were keen to join development projects and that Moscow saw no limit to the expansion of relations with Tehran.

He also described the JCPOA as a good agreement that helps global peace and stability, and described “some countries'” refusal to remain committed to the terms of the nuclear agreement as “unacceptable”.

“Unilateral dismantling of the JCPOA under any pretext is not acceptable,” Putin added.

Moreover, Presidents of Iran, Russian and Azerbaijan also held the second round of trilateral talks in the Iranian capital on Wednesday evening.

Following the meeting, the three leaders issued a joint statement stressing that all parties to Iran’s nuclear deal, should adhere to their commitments and that the agreement is “working effectively.”