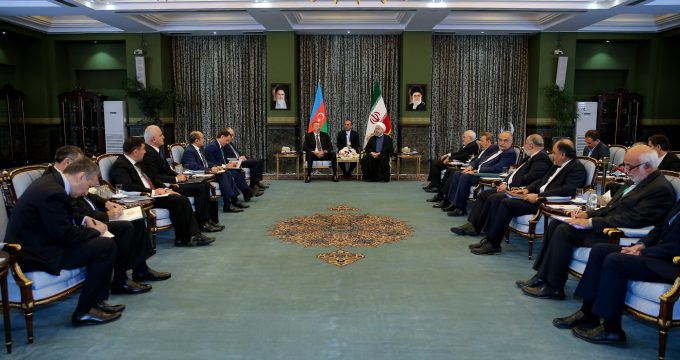 Tehran braces for coop. with Baku in Caspian oil exploration

Speaking at a meeting with Azeri President Ilham Aliyev in Tehran on Wednesday, Rouhani described attraction of finances and trade between Iran and Azerbaijan in various fields as positive, adding, “Iran is ready to cooperate with Azerbaijan in various industrial sectors including oil and gas swap and exploration of oil in the Caspian See region.”

“We are very glad that today, beside mutual Tehran-Baku relations, the trilateral Iran, Russia and Azerbaijan ties are also considered by focused upon by the officials of the three countries.”

Rouhani praised the growing ties between Tehran and Baku and said they have set an example for other countries in the region.

He said the presidents of the two countries have held ten bilateral meetings in recent years, which indicates that the two sides’ officials are determined to deepen relations in all spheres, Tasnim reported.

Aliyev, for his part, called for closer Tehran-Baku relations and described the common history, culture, and religion of Iranians and Azerbaijanis as a great asset that links the two nations.

The Azerbaijani president arrived in Tehran on Wednesday to take part in a tripartite meeting with his counterparts from Iran and Russia.

Heading a high-ranking delegation, Russian President Vladimir Putin is also in Tehran for the trilateral summit.

In August 2016, President Rouhani and his Russian and Azerbaijani counterparts held their first tripartite summit in Azerbaijan’s capital where they discussed ways of enhancing cooperation in the areas of commerce, energy, communications, transport and transit. They also exchanged views on environmental issues and the fight against terrorism.

During today’s three-nation summit, the Iranian, Russian and Azeri presidents will discuss regional developments and the battle against terrorism.