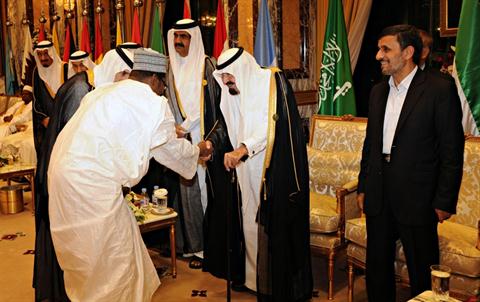 The United States says the suspension of Syria’s OIC membership sends a ‘strong message’ to the ruling regime, while Iran called the step against its key, regional ally as ‘unfair and unjust’

“Today’s action underscores the Assad regime’s increasing international isolation and the widespread support for the Syrian people and their struggle for a democratic state that represents their aspirations and respects their human rights,” State Department spokeswoman Victoria Nuland said.

A statement issued at the end of an OIC summit meeting in the holy city of Mecca in Saudi Arabia said participants had agreed on “the need to end immediately the acts of violence in Syria.”

The final statement also expressed “deep concern at the massacres and inhuman acts suffered by the Syrian people.”

The OIC “sent a strong message to the Assad regime by suspending Syria’s membership in the OIC,” Nuland said.

“The United States commends the OIC for its action and commitment to a peaceful resolution in Syria.”

They discussed Syria, as well as others in the Arab Spring series of popular uprisings against autocratic rulers in the Middle East and North Africa, and US engagement with Muslim communities, according to a State Department note.

Hussain’s attendance of the meeting “demonstrates the United States’ commitment to working with our partners in the international community to support the aspirations of the Syrian people and bring additional pressure to bear on the Assad regime,” it added.

The move by the OIC, which represents 1.5 billion Muslims worldwide, is aimed at further isolating Assad’s embattled regime, but its effect is seen as being largely symbolic.

Syria was suspended from the Arab League last year over its clampdown on the uprising that Assad characterized as a plot by Western and rival powers to overthrow his regime.

Saudi King Abdullah has presided over the meeting, attended by Iranian President Mahmoud Ahmadinejad, whose country has openly criticized the push to suspend Syria.

Iran slammed the suspension decision, calling the step against its key ally “unfair and unjust.”

“Syria should have been invited to the summit to defend itself,” Iran’s foreign minister Ali Akbar Salehi told the official IRNA news agency in the holy Muslim city of Mecca.

Salehi said Iran objected to the decision “because this is against the very charter of the organisation.”

“In our opinion, cooperation is more logical (than suspension),” Salehi said, according to the website of Iran’s state broadcaster.

Instead of suspending Syria, “we should seek a mechanism to exit the Syrian crisis, through which the opposition and the government engage in talks to create favourable conditions (to end the crisis),” he said.

Iran, a Shiite state, is Assad’s biggest ally and has pledged him full support in his fight against the armed opposition, although it denies having sent military forces or weapons.

Last week, Iran held a 29-nation conference on Syria attended mostly by ambassadors from like-minded countries, with a couple of foreign ministers. Saudi Arabia was not present.

At the end of August, Iran will host a larger meeting, that of the Non-Aligned Movement, which groups 120 nations considering themselves not within the world’s major power blocs.