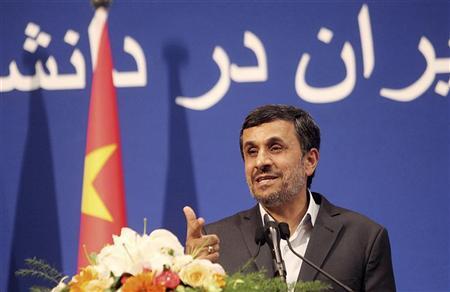 (Reuters) – Iranian President Mahmoud Ahmadinejad will attend a summit of Muslim leaders in Saudi Arabia expected to focus on Syria, Iranian media said on Monday, as tensions between Tehran and Riyadh run high over their opposing stances on regional uprisings.

The extraordinary summit of the Organisation of Islamic Countries (OIC) is to be held in Mecca next week.

“Mahmoud Ahmadinejad will be present at this summit at the invitation of King Abdullah of Saudi Arabia,” Mohammad Reza Forghani, the director of international affairs in Ahmadinejad’s office, was quoted as saying by state news agency IRNA.

Saudi Arabia’s Sunni leaders have accused predominantly Shi’ite Iran of stoking what they see as sectarian unrest in the region. Iran has expressed support for Shi’ite-led protests in Bahrain against the ruling Sunni Al Khalifa family, allies of Saudi Arabia.

The two regional powers also disagree on the uprising in Syria, where predominantly Sunni rebels are fighting to topple the government of President Bashar al-Assad, whose Alawite power base is an offshoot of Shi’ism.

Iran has steadfastly supported Assad’s efforts to suppress the rebellion, and has accused Western powers and countries in the region of encouraging chaos in Syria by sending fighters and arms there.

Senior Iranian lawmaker Alaeddin Boroujerdi said on Sunday that the summit in Saudi Arabia would be unlikely to yield any results given Riyadh’s “hostile stances” toward Syria, Iranian media reported.

Ahmadinejad made his first official trip to Saudi Arabia in March 2007, when he and King Abdullah agreed to fight the spread of sectarian strife.