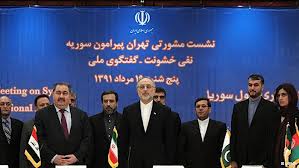 (Reuters) – Iran urged Syrian rebels on Thursday to start talks with President Bashar al-Assad about political reform and said it won international support at a meeting in Tehran for such a strategy to end the conflict.

The Iranian foreign minister insisted Assad’s administration – a key ally of Tehran – would not collapse under pressure from abroad and the state broadcaster said a diplomatic gathering attended by Russia, China , India, Jordan and a couple of dozen other states had backed Tehran’s call for a three-month truce.

With most countries represented only by their ambassadors and the absence of Western and most Middle Eastern states which have demanded Assad end his family’s 40-year rule, analysts saw little impact from the meeting on the continuing violence.

Afterwards, Iranian Foreign Minister Ali Akbar Salehi told a televised news conference: “The opposition needs to sit down and cooperate with the Syrian government to speed up the reform.”

Without naming Western and regional powers which have backed the rebels against Iran’s ally Assad, he said: “It will be a mistake to think that with the continuation of pressure and unwise moves, the Syrian leadership would finally collapse.

“With such interference, they are worsening the crisis.”

No text was available but the broadcaster cited one element of the statement, saying the meeting “welcomed Iran’s suggestion calling on the parties involved to halt the violence for three months in order to follow up talks”. It linked a ceasefire to the end of the Muslim holy month of Ramadan in about 10 days.

The statement also included a clause expressing deep concern over the fighting and loss of life and said that national dialogue was the only solution, state television said.

The Syrian government has said it is ready for dialogue but the opposition says Assad must step down as a precursor to any negotiations.

Continued hostilities in Aleppo, where the Syrian military is bombarding rebel fighters, make talks unlikely in the near future.

Also present at the Tehran meeting was the United Nations resident coordinator to Tehran, Consuelo Vidal-Bruce, who read out a statement from U.N. Secretary General Ban Ki-moon that rebuked both government and opposition for relying on weapons to win through violence.

“There will be no winner in Syria. Now, we face the grim possibility of long-term civil war destroying Syria’s rich tapestry of interwoven communities,” it said.

In an opinion piece published by the Washington Post on Wednesday, Salehi warned there would be catastrophic consequences if Assad fell from power.

“Syrian society is a beautiful mosaic of ethnicities, faiths and cultures, and it will be smashed to pieces should President Bashar al-Assad abruptly fall,” it read.

While Salehi said Iran sought a solution that was in “everyone’s interest”, Western diplomats have dismissed the conference as an attempt to divert attention away from bloody events on the ground and to preserve the rule of Assad.

“The Islamic Republic’s support for Assad’s regime is hardly compatible with a genuine attempt at conciliation between the parties,” said one Western diplomat based in Tehran.

“RUNNING OUT OF IDEAS”

It showed Iran was “running out of ideas”, he added.

Another Western diplomat said Tehran was trying to broaden the support base of the Syrian leader.

Along with Russia and China, Iran has strongly supported Assad, whose forces have launched crushing operations against anti-government protesters and armed opposition groups since the crisis erupted 17 months ago.

The Islamic Republic has resisted an agreement on Syria that requires Assad to quit as part of any political transition. There is no sign that Tehran is ready to adopt a new approach, despite setbacks for Assad including the defection this week of his prime minister.

But analysts say the recent signs of cracks in the Syrian leadership have taken Iran by surprise.

“Iran is trying to show strength and regional presence,” said Scott Lucas of the EA Worldview news website that specializes in covering Iran. But he noted the timing of Thursday’s meeting seemed rushed, given that Tehran will host a summit of the Non-Aligned Movement later this month.

“They seem to be so jittery about Syria, they couldn’t afford to wait,” Lucas suggested.

“Iran wants to coordinate efforts among countries that don’t accept the Western and Saudi approach to Syria,” said Mohammad Marandi of Tehran University. “It’s a counter-force to the so-called Friends of Syria gathering,” he said of an informal grouping involving Western and Arab powers and Turkey.