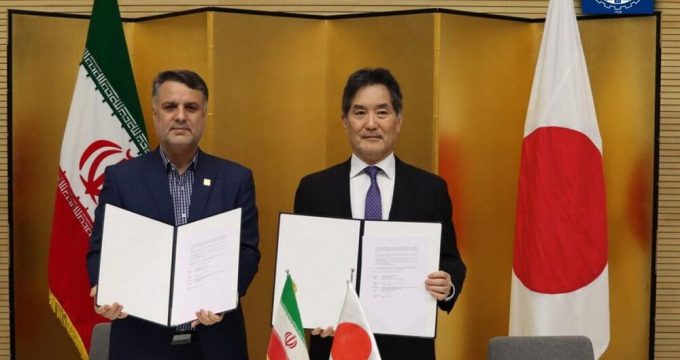 The University of Tehran Medical Sciences and the Embassy of Japan inked a memorandum of understanding (MOU) to benefit from the Grant Assistance for Grass-Roots Human Security Projects (GGP) Program.

The GGP program intends to contribute to the improvement of various fields such as health, education, skill training, and social welfare sectors.

In a meeting in Tehran on Wednesday, the Japanese ambassador to Tehran, Kazutoshi Aikawa, and Masoud Habibi, the president of Tehran University of Medical Science‘s Jahad Daneshgahi (The Academic Center for Education, Culture, and Research), signed the MOU.

Since 1999, 157 GGP projects have been carried out in Iran, and the Japanese government has cooperated with the Iranian government in these different fields, especially the field of health and hygiene, Aikawa said.

The agreement covers various fields such as health, education, skill training, and social welfare sectors. The first project is the introduction of preventive medical equipment for the elderly in Tehran province, which is for the health examination and screening of the elderly by electronic equipment to track their health and disease status, he explained.

By carrying out humanitarian activities in the form of GGP in all parts of the world, Japan takes a fundamental step toward friendship and connection between nations and the realization of sustainable global development, Habibi noted.

He expressed hope that in addition to the promotion and timely monitoring of the elderly’s health, an opportunity will be provided to pay serious attention to the new phenomenon of aging in Iran and exploit the capacities of this infrastructure in line with cultural, educational, and research goals.

Undoubtedly, using the valuable experiences of Japan, which has been the leading country in healthy life expectancy in the world for years with scientific management and efficient coping with the consequences of aging, can be a guide for Iran’s localized strategy, he explained.

Currently, the Iranian elderly population is 9.2 million, which constitutes 7.10 percent of the country’s population.

Over the [Iranian calendar] year 1410 (March 2031-March 2032), the elderly population will reach 13.5 million people, which is 14 percent of the country’s population, and Iran will officially be an old country.

The aging issue in Iran is very special from three perspectives, firstly, the fast pace of aging. Second, along with these very rapid quantitative changes, qualitative changes in aging such as feminization are happening.

The third feature of aging in Iran is that the progress in the field of health and nutrition has increased life expectancy, and besides, due to the decrease in the fertility rate, the infrastructure for the elderly population is not available in the country.

Iran is experiencing below-replacement fertility — lower than 2.1 children per woman — which indicates that a generation is not producing enough children to replace itself, eventually leading to an outright reduction in population.

The aging population and its negative effects will penetrate into the political, economic, and security position of the country in the region and the world.