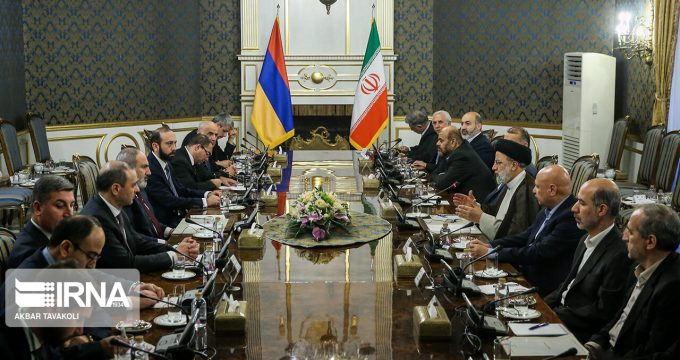 Iranian president Ebrahim Raisi in a meeting with Armenian Prime Minister Nikol Pashinyan on Tuesday said that maintaining peace, stability, and tranquility in the Caucasus region is significant for the Islamic Republic of Iran.

The meeting was held in the presence of President Ebrahim Raisi and Armenian Prime Minister Nikol Pashinyan, as well as some other high-ranking officials from both countries, in Tehran on Tuesday.

Terming the field of energy as one of the available scopes and capacities to boost the level of ties between Iran and Armenia, he highlighted that the Islamic Republic of Iran is ready to expand cooperation in other economic and commercial areas, including in the field of increasing the export of technical and engineering services.

Elsewhere in his remarks, President Raisi emphasized that the Caucasus region is part of Iran’s civilization, history, and culture, and said that maintaining peace, stability, and tranquility in this region is significant for the Islamic Republic of Iran and noted that the Islamic Republic of Iran is always ready to use its diverse and efficient capacities to establish and strengthen peace and security in the Caucasus region.

The Armenian premier, heading a high-ranking political and economic delegation, entered Iran on Tuesday at the official invitation of President Ebrahim Raisi, and presented a report on his country’s trilateral meeting with his Azeri and Russian counterparts in Sochi, as well as the latest developments related to the Caucasus.

Acknowledging the priority of Raisi’s government for developing relations with neighbors, he noted that given the interest of the two countries and the capacities available, they must work to improve the current level of relations between the two states.

He also called for strengthening transit cooperation between Iran and Armenia to connect the Black Sea to the Persian Gulf.

Elsewhere in his remarks, he thanked the constructive role of the Islamic Republic of Iran in the region and stressed that Iran’s efforts have always focused on stabilizing and strengthening peace and security in the region.