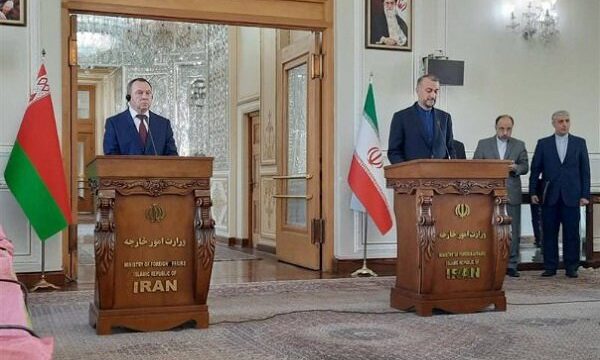 Iran’s foreign minister Hossein AmirAbdollahian has again expressed his country’s readiness for talks with Ukrainian officials on Western countries’ allegations that Iran has supplied drones to Russia to be used in the ongoing military campaign in Ukraine.

AmirAbdollahian made the remarks in a joint press conference with his visiting Belarusian counterpart Vladimir Makei in Tehran on Wednesday.

“It is clear to us that the leaders of certain European Union member states tend to adopt immature and radical stances on regional and international developments. This is while much of the bloc is treading the path of rationality,” he stated.

“We strongly dismiss the baseless claims of some countries on Russia’s use of Iranian drones in the war against Ukraine. We invite Ukrainian authorities to attend a bilateral meeting of experts, and present any evidence supporting the accusations,” the senior Iranian diplomat pointed out.

AmirAbdollahian said Iran’s principled policy is to oppose arming either of the parties involved in the Ukraine war, reiterating Tehran’s opposition to the ongoing conflict.

On Monday, the Iranian foreign minister said Tehran was ready to discuss the Western countries’ allegations about exporting drones to Russia in a joint session with Ukrainian officials.

In response to Western countries’ claims about Iran selling drones and other military equipment to Russia to be used against Ukraine, AmirAbdollahian said, “We have not sold and will not sell any weapons and drones to be used in the war against Ukraine, and cooperation between Iran and Russia will continue without having anything to do with the Ukraine war.”

He said Tehran and Moscow engage in various kinds of cooperation, including in the defense field, adding, “We have both received weapons from Russia and supplied weapons to Russia in the past, but not in the course of the Ukraine war.

Elsewhere in his Wednesday remarks, AmirAbdollahian called on European parties not to continue with the unconstructive, hackneyed and failed approaches they have been adopting in the past years.

He stated that the Iranian Foreign Ministry has imposed a round of sanctions on a number of European institutions and officials over their support for terrorism and promoting violence and extremism.

For his part, Makei stressed the need for proper measures to be adopted by Belarus and Iran in response to Western sanctions.

The Belarusian foreign minister also noted that the implementation of the previously signed agreements would promote economic cooperation between the two countries.

Earlier on Wednesday, Iran’s Foreign Ministry slapped sanctions against eight organizations and companies as well as 12 officials from Europe for supporting and promoting terrorism and violence that have resulted in riots, terrorist activities and violation of human rights harming the Iranian nation.

The blacklisted individuals are banned from receiving a visa or entering Iran, and the ownership of their property and assets in Iran will be transferred to the Iranian government.

By PRESS TV
Iranian drones in the Ukraine war, Russia-Ukraine war October 27, 2022
“Perpetrators behind Shiraz terrorist attack to be punished”
Iran to diversify China exports with focus on agrifood