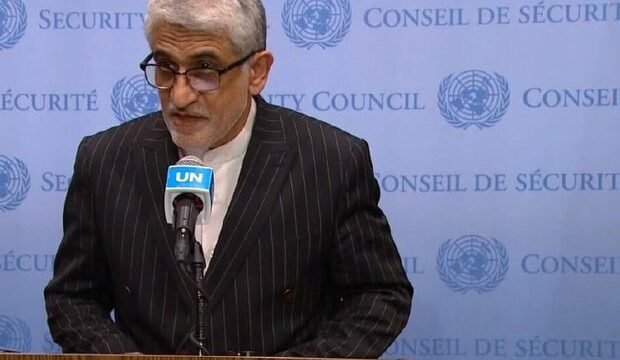 Iran and Russia have rejected baseless allegations that Tehran supplied Moscow with a fleet of drones for use in the war in Ukraine.

Speaking to reporters after a Security Council closed-door meeting on Wednesday, Iran’s ambassador and permanent representative to the United Nations Amir Saeed Iravani categorically rejected “unfounded and unsubstantiated” claims that Tehran has transferred UAVs to Moscow for use in the war in Ukraine.

“The Islamic Republic of Iran has taken a clear and consistent position on the situation in Ukraine which has been pronounced since the start of the conflict,” he said.

The Islamic Republic, he added, has always emphasized that all UN members must fully respect the principles enshrined in the United Nations Charter as well as applicable international law, including sovereignty, independence, unity and territorial integrity.

As a country that has experienced eight years of imposed war and aggression, Iran has “consistently advocated for peace and the immediate end to the conflict in Ukraine,” urging the engaged parties to exercise restraint, avoid escalation of tension and engage in a meaningful process for settling the dispute through peaceful means while also addressing the root causes of the situation, the diplomat said.

The Iranian envoy once again voiced support for “ongoing efforts to find a peaceful solution to this conflict” and noted that Iran’s Foreign Minister Hossein AmirAbdollahian has made contacts with his counterparts from both sides on several occasions.

Iravani said it is “disappointing” that the West has mounted a “disinformation campaign against Iran” and made “misleading interpretation of the Security Council Resolution 2231” as an attempt to “wrongly establish a link between their baseless allegations against Iran with this resolution.”

“Iran emphasized that the issues surrounding the ongoing conflict in Ukraine are completely irrelevant to the Resolution 2231 both in substance and format and any activity in this regard fall outside the scope of the resolution and secretariat mandate,” he added.

He emphasized that “Iran is of the firm belief that none of its arms exports, including UAVs, to any country” violate the Resolution 2231.

“The Islamic Republic of Iran will continue its constructive engagement to help the peaceful resolution of the conflict in Ukraine,” he pointed out.

During a telephone conversation with his Croatian counterpart Gordan Grlić Radman on Wednesday, the Iranian foreign minister once again denied the allegations, asking Kiev to submit evidence of such drones if it has any.

“We have told Ukrainian officials to produce any evidence on deployment of Iranian drones in the Ukraine war,” AmirAbdollahian said.

Russia’s Deputy UN Ambassador Dmitry Polyanskiy also said on Wednesday that his country will reassess cooperation with UN Secretary General Antonio Guterres if he sends experts to Ukraine to inspect drones that Western powers claim were made in Iran and used by Moscow in the ongoing war in that country.

Speaking to reporters after the UN meeting, the Russian diplomat called on the UN chief and his staff to “abstain from engaging in any illegitimate investigation.”

“Otherwise, we will have to reassess our collaboration with them, which is hardly in anyone’s interests. We do not want to do it, but there will be no other choice,” he said.

He emphasized that the drones found in Ukraine are not Iranian but Russian-made, explaining that images of the drones downed in Ukraine clearly have Russian inscriptions on them.

Also on Tuesday, however, the Pentagon said it could not confirm transfer of any Iranian weaponry to Russia.