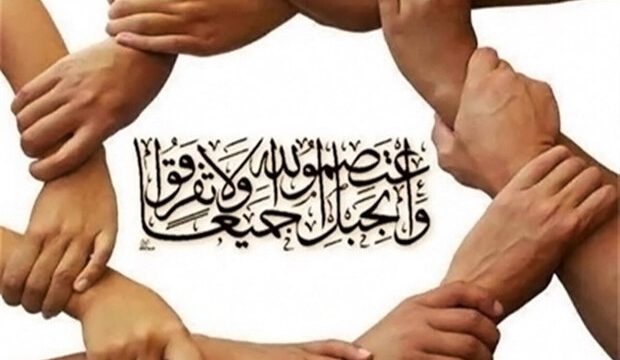 Being the center and pivot of all Muslims’ emotions and beliefs, Prophet Muhammad (PBUH) could be considered the greatest source of unity for all Muslims worldwide.

Seeking unity among Muslims and proximity to Islamic schools of thought is a fundamental necessity, however, there are diverse jurisprudential and theological approaches in every Muslim community.

On August 21, 2006, Leader of the Islamic Revolution Ayatollah Seyyed Ali Khamenei said that “what is meant by Islamic unity is not making all Islamic beliefs and religions one.”

He went on to say that “what is meant by the unity of the Islamic world is an absence of disputes, “…do not dispute, or you will lose heart.” [Qur’an, 8:46]

On October 16, 1989, Ayatollah Khamenei termed the honorable Prophet Muhammad (PBUH) as the greatest source of unity during all periods of Islam.

“He can also be the source of unity today because the majority of Muslims’ belief in this holy, noble being is intertwined with affection and love,” he noted.

“Therefore, this noble person is the center and pivot of all Muslims’ emotions and beliefs. This centrality is a cause for the love in the hearts of the Muslims and closeness of Islamic sects.” He further noted.

In November 1981, following an inspiration by late Ayatollah Khomeini (the founder of the Islamic Republic of Iran and the leader of the 1979 Iranian Revolution), the week beginning with and ending in the birth anniversary of Prophet Mohammad in Sunni and Shia narrations has been observed as Islamic unity week ever since. This ceremony aimed to build solidarity between Shia and Sunni Muslims across the globe.

Since 1990, Islamic Development Organization was in charge of holding four of the International Islamic Unity Conferences, but after the establishment of the World Forum for Proximity of Islamic Schools of Thought by the order of the Supreme Leader Ayatollah Khamenei, this Forum became responsible about the mission of holding this important conference.

The purpose of the International Islamic Unity Conference is to create unity and solidarity among Muslims, develop consensus among scholars and scientists to approximate their scientific and cultural viewpoints, and present practical solutions to reach the Islamic Unity and Unified Islamic Ummah in the Islamic World and solving the problems of Muslims and presenting solutions for them.

But who prophet Muhammad (PBUH) is

Muhammad (PBUH) spent his childhood as an orphan. A few months after ‘Abd Allah (his father) married Amina, ‘Abd Allah went on a business trip to Damascus and passed away on his return in Yathrib (now Medina). Muhammad spent his early childhood with a woman from the Banu Sa’d tribe, named Halima, who breastfed him. Muhammad lived his first years with his wet nurse and her husband in the desert.

After the loss of his mother, Abd al-Muttalib undertook the guardianship of Muhammad. When Muhammad was eight years old, ‘Abd al-Muttalib also passed away. Since then, Muhammad’s uncle, Abu Talib, took care of him. In the house of Abu Talib, his wife, Fatima bt. Asad was so kind to Muhammad that when she passed away, the Prophet said, “Today, my mother has died!”

One of the most important events in the life of Muhammad, before his marriage, was his participation in an agreement called Hilf al-Fudul in which some of the youths of Mecca pledged “to support any person under oppression and defend their rights”.

Muhammad married Lady Khadija (PBUH) when he was twenty-five years old. Khadija lived with the Prophet for 25 years and passed away 10 years after Bi’tha. Khadija gave birth to a few children, the boys of whom died in childhood. The most famous of her daughters was Lady Fatima (a).

According to the Twelver Shi’as, the mission of the Prophet (s) began on the Rajab 27/ June 25, 610. In the years prior to his mission, Muhammad (s) spent a lot of time in solitude, worshiping God. He would spend a month in solitude in a cave called Hira’, in the mountains and would worship God there. After the month was completed, he returned to Mecca and circumambulated the Ka’ba seven times or more before returning home. He was in the cave of Hira’ when the mission began and verses of the Qur’an were revealed to him.

It is widely believed that the Prophet (s) was forty years old at the beginning of his mission.

It is recorded that Muhammad (s) invited people secretly to Islam for three years after his mission. However, because of the order of the revelation of the verses of the Qur’an, some believe that the Prophet’s (s) public invitation was carried out very shortly after the first revelation.

At the beginning of 11/632, the Prophet (s) became sick and passed away. Before he passed away, when he was very ill, he gave a farewell speech to the Muslims and advised them to be kind to one another.