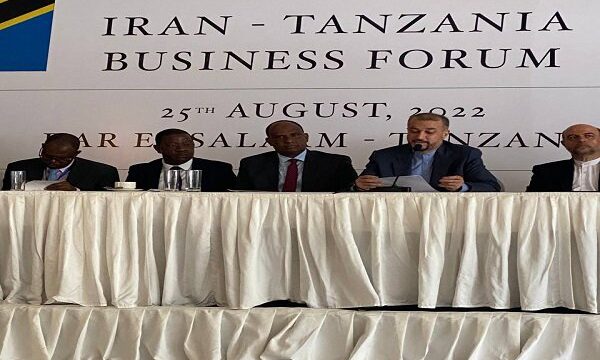 Referring to the economic, industrial, and technological capacities of the Islamic Republic of Iran, AmirAbdollahian declared the priority of Iran’s foreign policy to develop economic relations with African countries, especially Tanzania.

The top Iranian diplomat made the remarks speaking at Iran-Tanzania Business Forum which was held on Thursday morning in Dar es Salaam.

Stating that the African continent is one of the main priorities of the economic diplomacy of the Islamic Republic of Iran, the Iranian foreign minister said, “In this context, Tanzania is one of the most important countries in this continent, which always has a special place in Iran’s foreign policy, and the people and officials of the two countries have a positive view toward each other.”

Describing the business forum as proof of the interest of the parties to promote economic cooperation, he noted that Tanzania has high capacities for investment in various areas such as mining, agriculture and animal husbandry, fisheries and industries, tourism, trans-territorial cultivation, and export of tropical fruits.

AmirAbdollahian went on to say that Iran, as one of the industrialized and developed countries in Asia, has great potential in the fields of exporting technical and petrochemical engineering services and knowledge-based products, adding, “We are ready to help Tanzania to achieve its goals for development and industrialization.”

He also emphasized the serious will of both Iranian and Tanzanian sides to prioritize economic diplomacy.

“The establishment of the joint economic commission of the two countries with the aim of pursuing our priority goals and projects can be the first step and the starting point of our cooperation,” he cited.

AmirAbdollahian arrived in Tanzania late Wednesday after his trip to the Malian capital of Bamako.

Upon his arrival, the top Iranian diplomat was welcomed by his Tanzanian counterpart Liberata Mulamula.

The Iranian foreign minister is scheduled to meet with the President of Tanzania and hold business and official meetings in Zanzibar.