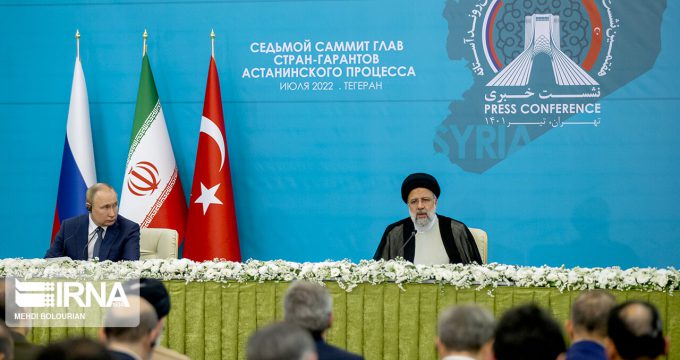 Tehran a partner for peace, an ally against unilateralism

Referring to Iran’s hosting of the conference of Astana Process guarantor states.Iranian Foreign Ministry Spokesman Nasser Kan’ani described Tehran as a partner for peace and an ally against unilateralism.

Tehran is a partner for peace and an ally against unilateralism, Iranian Foreign Ministry Spokesman Nasser Kan’ani tweeted Thursday after posting a photo of the 7th Conference of Astana Process guarantor states was held on Tuesday night, with the partipation of Iranian President Ebrahim Raisi, Russian President Vladimir Putin, and Turkey’s President Recep Tayyip Erdogan at Tehran Summit Meetings Hall.

Peace, stability, and common development can be achieved through dialogue and collective cooperation without foreign intervention.

In the Tuesday tripartite meeting, the presidents of Iran, Russia, and Turkey exchanged views on the latest developments in Syria and ways for boosting campaigns against terrorism.

Also, ‘The 6th Conference of Astana Process Guarantor Countries” in the summer of 2020 was held via videoconferencing due to the coronavirus pandemic.

Russia, Turkey, and Iran have been during the past few years pursuing the Astana Peace Process, aimed at ending over 11 years of war in Syria, and this is the first year after the coronavirus pandemic that President Raisi is hosting the event.

The first Conference of Astana Process Guarantor Countries after the initial meeting in Astana, Kazakhstan, was held in Sochi, Russia, with the particaption of representatives of Iran, Russia, and Turkey, aimed at brokering a ceasefire and finding a political solution in November 2017.